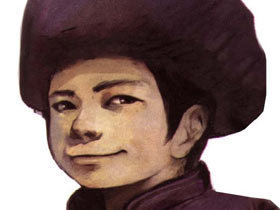 Enkak was a cheerful young boy who was a member of An’jou’s caravan. He was An’jou’s son and hoped that he would “get big fast” so that he could help his father hunt.

Enkak was related to Kou, another member of the caravan. He called her auntie, although it is not revealed in Panzer Dragoon Saga whether she is his biological aunt or not. Enkak stated that he did not like Kou’s cooking.

When An’jou told him the story of the sunken city in Uru, Enkak told his father that he wanted to go and find the ruins in northern Uru. 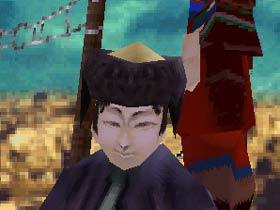 At the start of the third disc of Panzer Dragoon Saga, Enkak became sick with Meccania fever (possibly an Imperial insult to the conquered nation Meccania). Enkak went into a coma. Edge found a Tobitama Rock in Uru and gave it to the caravan folk who were able to use it to cure Enkak. When Enkak came out of his coma he thanked Edge for curing him. Enkak wondered why everyone was sad and believed it was because he was sick.

An’jou would not tell Enkak how far they were going to travel. Enkak, however, seemed content with the journey and thought the food in the forest tasted good.