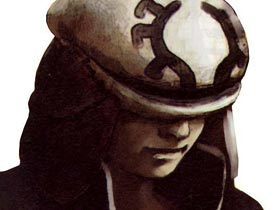 Zadoc was a compiler who belonged to the Seekers of Skiad Ops Gash. In Panzer Dragoon Saga he gave Edge a number of books, including a diary written by Gash’s old master, Skiad Ops Endow (also known as Lundi, the dragon rider from Panzer Dragoon Zwei). Zadoc revealed to Edge a lot of information about the Towers, Azel, and Sestren although how much of it was true is subject to debate. He appeared to be one of the most knowledgable people amoung the Seekers, having a strong knowledge of the Ancient ruins. Gash pointed Edge towards Zadoc when Edge needed information to complete his quest. 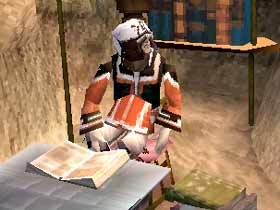 Zadoc in his library.

Like Gash, Zadoc believed that the dragon was the Divine Visitor, going as far as to tell Edge, “your dragon is our salvation.” He claimed that the Seekers had been watching Edge since he found his dragon because it was written that his dragon had the ability to destroy the Towers. It is likely that the writing Zadoc was referring to was the old diary of Skiad Ops Endow.

When he met Edge, Zadoc claimed that the Seekers did not know Azel’s true purpose until recently. It was only when she was unearthed that they discovered her true purpose. Skiad Ops Endow and another compiler called Pinekhas had been studying drones before Azel was unearthed and Zadoc likely used their research to help determine how she could be used as a weapon against the Towers.

He had also researched Zoah’s Guardian Fire, giving Edge a book called the Memory Report which contained information about a similar structure.

When Zadoc learnt that Paet had assembled an airship all by himself he was very impressed saying that it was, “an incredible feat for such a young man”.