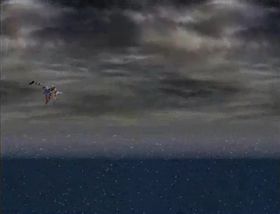 A sea located to the west of the Continent. Its appearance was typical of a sea, a deep blue body of water. The old Imperial Capital was located on the edge of the West Sea, and the Tower which the Empire discovered was located in the sea.

During the final episode of the original Panzer Dragoon game, Kyle Fluge and his dragon fought the enhanced Dark Dragon in the air above the West Sea.

The river that was located in the Forest of Mutation flowed into the West Sea.

It is unknown how wide the West Sea was, and if there were any other continents in the far west. The official Panzer Dragoon timeline states that in 80 B.F. the tribe that would later become the Empire washed ashore on the coast of the Continent, however it is unclear whether this was the coast bordering the West Sea or not.