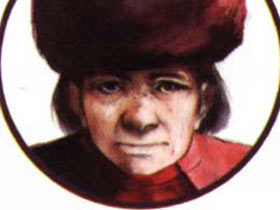 Kou was a member of An’jou’s caravan. She was the mother of a girl named Fei and the wife of the shop owner, Baicah.

Kou had an overpowering personality and did not hold back what she was thinking. When she first met Edge she thought that he was from the Empire and was subsequently quite rude to him. However, as Edge began to help the caravan people more and more, Kou grew to respect him as a capable hunter.

When Enkak became ill with Meccania fever, Kou worried about his health.

She wished that her husband Baicah would hunt alongside An’jou, but she told Edge that he was out of shape. However when Baicah cured Enkak from the Meccania fever she was glad that his hobby came in handy. 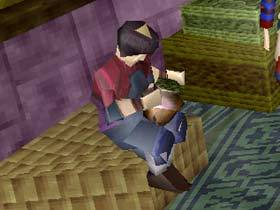 Kou inside her tent.

Kou acted quite protectively of her daughter, Fei and often spoke for her when Fei was too shy to speak up. At one point, Kou told Edge that he should settle down as he could not continue adventuring forever. She then asked Edge if he would have Fei as his bride (and Fei was up for it). She told Edge that the family name must live on. However, she understood that Edge was not ready as his quest was not yet finished.

Kou was angry when she found out that the Empire had destroyed Zoah just when they were about settle down, although she made no mention of the fact that they would have been killed if they had arrived at Zoah sooner. She talked to her daughter Fei about building a village in the forest, although apparently nothing came out of that idea since the caravaners are last seen by players moving away from Zoah and crossing the desert in Panzer Dragoon Saga’s epilogue.

When Bezer crashed near the caravan in Paet’s ship, Kou commented that she would have liked to have saved his life.