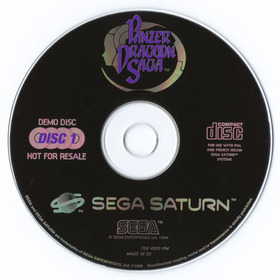 A PAL demo disc for Panzer Dragoon Saga, which is literally the first disc of the finished game; it seems that Sega of Europe simply produced extra copies of that disc and printed the words “DEMO DISC - NOT FOR RESALE” and a different product code on the front of them. In the United Kingdom this disc could be picked up with the May 1998 issue of the official Sega Saturn magazine, where it came stuck to the cover in a transparent plastic sleeve. The idea for including the entire first disc of Panzer Dragoon Saga with the magazine was thought up by Richard Leadbetter, the magazine’s editor. In an interview with Sega Saturn UK, Leadbetter stated that, “Coming up with the Panzer disc idea was one of my fondest memories. I played through the whole game with a sense of absolute wonder and then realized that the first disc was relatively short and would make for a superb, very special demo.”1