During Imperial Year 89, the Empire detected trace amounts of energy north west of the Imperial capital, and discovered the tip of a colossal black Tower spiring from the seabed of the West Sea. The Tower has been deemed the “Empire’s Tower” by fans, because it was the only Tower the Empire was given the opportunity to study for a long period of time. According to the Tower Report that Edge finds in Panzer Dragoon Saga, all other excavations stopped so that the Empire could focus its resources on harnessing what Imperial legends called the ultimate weapon.

If the introduction for Panzer Dragoon is to be believed, an arsenal of smaller but still nonetheless deadly Ancient weapons were unearthed from this Tower of myth and legend that the Empire discovered outside the capital, and was used to create strife with the surrounding nations. The source of the Empire’s advanced technology did not come completely from that single Tower however, but ruins scattered across the Continent. It is made clear to players that the Empire salvaged the lost technology of the old world from many places.

The Tower not far from the Empire’s capital city was only partially active when the Empire discovered it, and that was why the Empire was able to detect it at all. At the beginning of Panzer Dragoon while the Empire was still in the process of excavating the ruin, a monotonous voice that sounded as if it was spoken through a large voice amplifier, was heard coming from the Tower, thus stating the activation of what it called “Unit 01” and “Unit 02”.

The Empire wanted to harness what it could only see as an Ancient weapon and claimed it as their own, but in the end the Tower was too powerful for them to control. A black dragon and its rider raced towards the Tower to activate it before the blue Heresy Dragon could destroy it.

According to the flashbacks seen at the end of Panzer Dragoon Saga, the existence of the Blue Dragon drew the unwanted attention of the Towers’ controller who was watching over them from the Sestren data circuit. As a direct response, Sestren sent a guardian dragon, also known as the Dark Dragon (a descriptive name if nothing else), to end this threat, which it saw as an “impurity” in its eyes, once and for all.

The excavation of the Tower seemed to be a spark that lit the fuse for the events that followed, because the Sky Rider asked Kyle to not let the Dark Dragon return to the Tower. The Blue Dragon and the Dark Dragon shared the same destination. It is never made clear if the Dark Dragon was activated to activate the Tower or if it was sent to stop the blue Heresy Dragon from destroying it, but it is clear that the Empire’s presence inside the Tower drew the attention of both dragons.

The Heresy Dragon soon intervened to stop the Dark Dragon from reaching the Tower, at which point the Dark Dragon’s task of activating its defences became all the more urgent. Activating the Tower would have been the final solution to the dragon as well as the growing human threat. 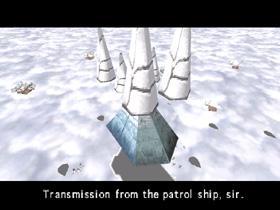 The Empire gathers its entire fleet in preparation for an attack. 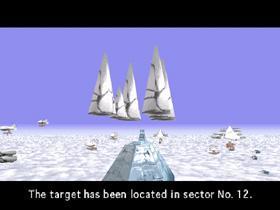 The Imperial fleet was going to face a real enemy this time.

The human Empire tried to energize the dormant ruin with battleship engines, but to no avail. Days of painstaking research led the Imperials to the same impasse. However, the Tower showed signs of life as soon as two dragons breached Imperial airspace. The Empire sent a huge fleet of warships to intercept the dragons, but couldn’t stop them from breaking through Imperial airspace and reaching the Tower.

Kyle, a human hunter, took the Sky Rider’s role as rider of the Heresy Dragon who was in the form of an armoured Blue Dragon at the time. The Blue Dragon would leave a very deep impression on Imperial history, for it was held responsible for much of the destruction that followed in the wake of these events in the eyes of Imperial history. But unbeknownst to the Empire, the Dark Dragon that the Blue Dragon was chasing was the real enemy. 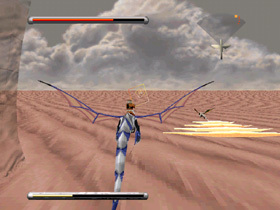 The Dark Dragon will allow nothing to stand between it and the Tower. 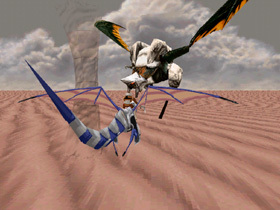 After being defeated for the first time we can actually see the sinister dragon's equally dark rider.

At the end of Panzer Dragoon episode 2, the Dark Dragon directly intercepted Kyle and his dragon en route to the Tower outside the Imperial capital, and the two dragons literally came face to face with each other. Here players can see the dragon’s rider again, who like the Dark Dragon, also had glowing red eyes. The Dark Dragon was able to create tornadoes in an otherwise calm environment, which was possibly a sign of its connection to a Tower built to control the environment. The “Empire’s Tower” started to come to life the moment the dragons entered Imperial airspace (according to the Imperial report regarding these events). It would be doubtful that these tornadoes merely followed the Dark Dragon, or that wind pressure suddenly dropped in its vicinity at that time. Either way, the Dark Dragon somehow stirred up these tornadoes.

After its defeat, the Dark Dragon raced towards the Tower with even more urgency. During Panzer Dragoon’s introduction sequence, the Dark Dragon killed the blue dragon’s rider, but left the dragon alone afterwards and shot off into the distance content to leave the Blue Dragon unharmed. Activating the Tower was still a higher priority than killing the Blue Dragon. The Dark Dragon was obsessed with reaching the Tower, which seemed to be an obsession that prevented it from remaining after killing the Sky Rider. The two dragons only met again when the Blue Dragon caught up with it at the end of episode 2. 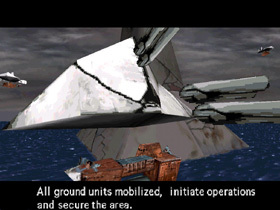 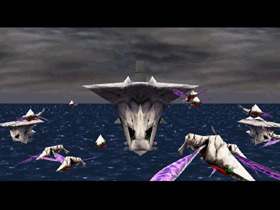 In the following moments, the Imperial ships are quickly destroyed by the Tower's minions.

When Kyle and his dragon neared the Tower, they heard a voice coming from the Tower again. The Tower went active as soon as it received and confirmed instructions from what it called Unit 01. By then the Dark Dragon was in range of the Tower and took the final steps to bring it online. It is possible that the Dark Dragon or its (supposedly) drone rider merged its mind with the Tower and became one with it the moment they were in communication range.

The Tower wasted no time in executing its plans. Hundreds of pure-type monsters rose up from the sea with one thing on their mind: population reduction. The Imperial warships guarding the Tower fell from the sky within seconds of its activation when the Tower’s own guardians were ordered to secure the area. According to Empire’s report regarding these events, the monsters also invaded the capital and reduced it to flames. 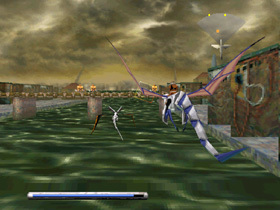 The dragon and Kyle chase the Dark Dragon through the Imperial capital located on the western shores of the Continent. 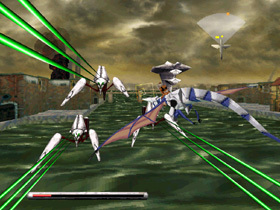 Pure-type creatures attempt to block the Heresy Dragon's path to the Tower and throw everything they have at him.

The Blue Dragon and Kyle chased the Dark Dragon all the way through the Imperial capital even though it was now filled with monsters. The two were forced to fight their way through an army of pure-type creatures to the heart of the problem: the black Tower itself. Silver metallic sentries hovered in the air and fired beam lasers at the approaching armoured Blue Dragon and gun wielding rider. Anything attempting to block the Blue Dragon’s path was shot out of the sky, however, as both raced towards the Tower. 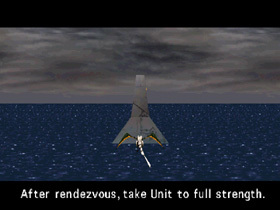 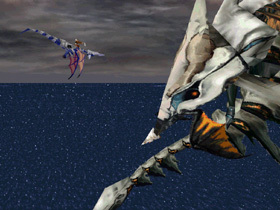 ...and exits as a giant serpent.

Despite being besieged from all sides, Kyle and his new dragon friend let nothing stand in their way. Later when the Dark Dragon reached the Tower, the voice of the Tower confirmed the presence of Unit 01 again, which seemed to be a designation for the Dark Dragon itself.

The Tower vanishes in a blaze of glory and the Empire's plans disappear along with it.

After the battle, the armoured Blue Dragon flew inside the Tower and orbs of pure white energy gathered around his horn, causing it to start glowing bright white. The dragon floated Kyle away to safety in a bubble, then started building up more and more energy until the Tower exploded in blinding rays of white light. This was reminiscent of the final moments of the Ancient sky ship Shelcoof in Panzer Dragoon Zwei.

The Tower only confirmed the presence of one Unit even though the Tower confirmed the activation of two individual units at start of the game. The “Unit 02” that the Tower speaks of is not revealed to players, but there are a few possibilities: