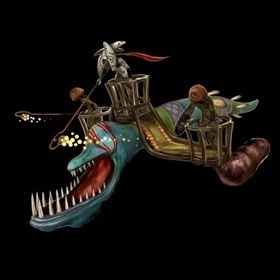 The Wormriders, or as they are sometimes unlovingly called, “Bug Herders”, were first introduced in Panzer Dragoon Orta. This tribe of people have learnt to co-exist with the mutated biomonsters of the Ancient Age and because of this they have been labelled as uncivilised by civilisations such as the Empire. However, the fact that the Wormriders have successfully managed to tame creatures that were created to lust for human blood could be considered a sophisticated feat in itself.

The appearance of the Wormrider varies from person to person. One example of a Wormrider male is Mobo, the Wormrider who Orta met soon after she escaped from her capturers. Mobo was first seen above the Forest of Mutation hunting a large yondo-worm on the back of his worm-like baldor, Hamah-hamah. Mobo’s head was covered by a helmet of Ancient material, not unlike the armour that protects the skin of many biomonsters and drones. Behind the helmet, Mobo had bright red hair that was cut into a mohawk, which gradually formed into a long ponytail that descended past his waistline. His garments were made of rough materials and were brief, portraying the closeness to nature of the Wormrider lives. 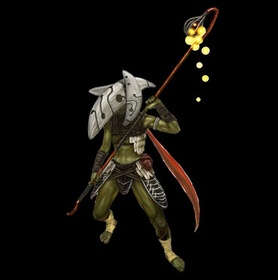 The Wormriders did not only live alongside the baldors but they had succeeded in learning how to ride them. It is thought by some that it was the baldor controlling the rider, but this appears to be groundless superstition. The Wormriders have placed basket-like structures and decorations over the baldors back which they stand in, showing that they have been fully domesticated by this tribe of humans. Two Wormriders stand in baskets overhanging either side of the baldor and the leader is placed on a bigger basket, which is placed in the centre of the baldor’s back. The staff in the leader’s hand contained a power stone (mentioned in Panzer Dragoon Orta’s manual) which keeps the baldor under control. It is possible that the baldor was attracted to the light, which the stone in the top of the rod emits. It is questionable whether the Wormrider had complete dominion over the baldor though; Mobo and his mount Hamah-hamah were life-long companions and shared a close bond, not unlike the bond between a dragon and its rider. 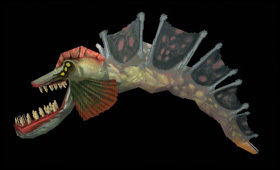 A baldor from Panzer Dragoon Saga.

The baldors that the Wormriders use as steeds differ in several ways from their valley dwelling cousins. The baldors in Panzer Dragoon Saga, which lived near Excavation Site #4 and in the Deep Canyon Gulch areas, were much more like wild animals. They would gather under the influence of a Baldor Queen and hunt in pairs. In Panzer Dragoon Orta, the baldors were more domesticated. Players are never shown these baldors firing spinal arrows or inflicting a terrible bite, which was their chief method of hunting in Panzer Dragoon Saga. The physical appearance of the Wormriders’ baldors is different as well. The Panzer Dragoon Orta baldor does not bear the two large crests that stood upright across the Panzer Dragoon Saga baldor’s back, suggesting that this was in fact a different species or subspecies of baldor that the Wormriders had somehow trained to fight in a more civilised manner. The purple orbs that the more worm-like baldors shot out of their mouths were almost like bullets, suggesting that the baldor was once a war beast in the Ancient Age. Whether these baldors were stray creatures from a fallen baldor queen, or whether they had chosen a lifestyle involving humans remains unknown. 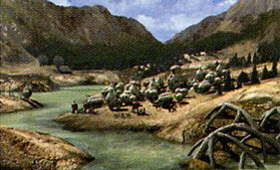 The Wormriders den atop the back of a lathum.

In an interview with Play Magazine, Akihiko Mukaiyama stated that Smilebit wanted to place a longer side story in Panzer Dragoon Orta telling the story of a Wormrider, but it was removed due to time constraints.1 Although nothing has been confirmed, the team would like to incorporate that side quest into the next Panzer Dragoon game (if there is one).