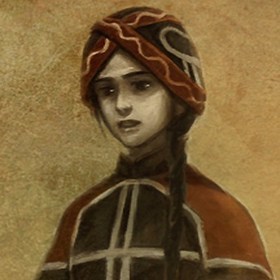 Emid was a young Seeker who lived in the new den that the Seekers had built after the destruction of their stronghold in Yelico Valley. She was part of the group that found Iva after his ship was taken down by Orta and her dragon.

Although the other Seekers were against the idea of having an Imperial among their ranks, Emid convinced them that Iva wouldn’t be a problem. Iva learned from her that the Seekers lived as nomads and tried to make places inhabitable for humans, something which they felt was now their duty.

Emid sensed in Iva the power to change things, and thought that their encounter was no coincidence. She told him about a weapon that the Seekers found which was hidden in Yelico Valley. 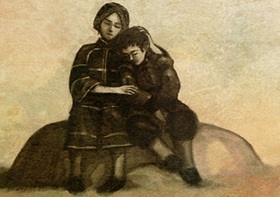 Emid holding Iva in the aftermath of the battle against the dragonmares.

By doing so, she unwillingly helped Iva complete the destiny she had seen in him. Emid comforted an exhausted Iva after he had successfully used the secret weapon to stop the dragonmares’ attack on the Seekers, holding him as he slowly fell asleep. Some fans assume that Iva passed away peacefully in Emid’s arms at that moment, as he had used up all of the medicine that kept him alive up until that point.