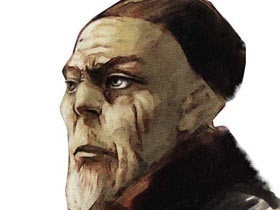 Damon was the high priest of Zoah. He had a grandson named Bezer who also lived in Zoah. Damon had adopted Bezer.

Damon disliked outsiders and when he met Edge he told him to leave the Holy District as soon as his business was finished. Damon revealed that the reason he did not like outsiders was because long ago there was battle against some outsiders. During the battle, his son and son’s wife were killed. The reason why he looked after Bezer was because Bezer’s parents are both dead.

Damon was angry at Viaman for sending Edge to attack the Imperial airforce base. He believed that the actions of Viaman and Edge would bring the wrath of the gods upon Zoah. He pointed out that even if the Grig Orig did not exist, a battle squadron from the Empire could annihilate Zoah. 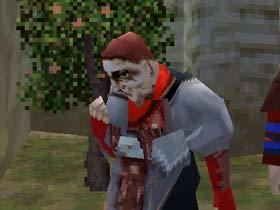 When Edge destroyed the Imperial airforce base, Viaman took Damon’s place as the new high priest of Zoah.

Although Damon was Bezer’s guardian, the two appeared to have a strained relationship. When Damon lost his title of high priest, Bezer (who had run away) still did not want to go home to be with his grandfather.

After loosing his title, Edge encountered Damon praying. Damon asked, “We’ve been abandoned by the gods, and you still come to pray?”