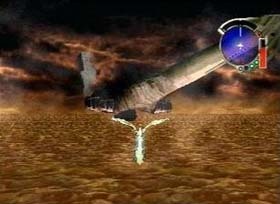 A ship created by the Ancients that defended the Tower of Uru in the Ancient Age and continued to do so in the time of Panzer Dragoon Saga. Mel-Kava created a fog barrier around the Tower to hide it from potential enemies. The ship was huge compared to Imperial ships and Edge described it as being “as big as Viaman’s ass”.

Paet informed Edge that Mel-Kava was also known as ‘God’s Carriage’. It appears that Mel-Kava is based on the word Merkabah, which is a Hebrew word for chariot. When left untranslated, Merkabah refers to the throne-chariot of God, featured in the visions in Ezekiel chapter 1 of the Hebrew Bible.

The people of Zoah had legends about Mel-Kava. According to these legends, Mel-Kava was nearly invincible. The legends stated that the ship was crawling with monsters on the inside and surrounding by flying monsters on the outside, but the key to destroying the ship lay within. There was an old saying in Zoah that Mel-Kava had ‘a pair of wings’. Paet, who wrote about Mel-Kava, believed the saying referred to the pair of engines used to keep Mel-Kava in the air.

Eventually, Edge destroyed Mel-Kava, removing the fog barrier and clearing a way to the Tower.