The Panzer Dragoon world where the series takes place is not given a name, unlike other fictional worlds such as J.R.R. Tolkien’s Arda and Frank Herbert’s Arrakis. The Continent where the games take place, also unnamed, is primarily a barren wasteland that has literally been torn apart by what appears to have been an apocalyptic war in the Ancient Age. It is an arid world where scars run deep and are only deepened by wartorn nations who have not learned from the lessons of the past. By the time that the Panzer Dragoon series takes place, ten thousand years have passed since the fall of the Ancients. No one knows how or why the Ancient civilization collapsed.

Although most of the Panzer Dragoon world is covered in an arid desert, there are many oases in certain sections that are teeming with life. These appear to be located near ruins, especially those located near the Towers which were designed by the Ancients to monitor and control the environment. These locations include lakes such as Uru and forests such as the Forest of Zoah.

The people who were left behind to live in the ruins of the old world speak a peculiar language (known as Panzerese by fans), which is a mixture of Latin, German, and ancient Greek with a Japanese accent. Some might consider this evidence that the games are set on Earth in the future, or that the inhabitants at least came from Earth at some point in the past. However, neither of these possibilities are revealed in the series as fact. The hybrid language may simply have been invented by the creators of the games in order to make the world seem and sound more alien. 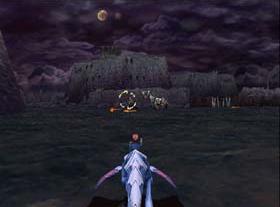 Take a look in the sky above. 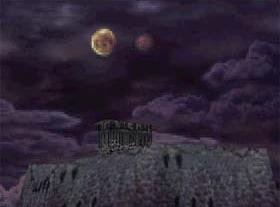 If players take a look at the sky during the first episode of Panzer Dragoon Zwei, they will notice that the world of Panzer Dragoon has twin moons. Here players are greeted by the sight of the unfamiliar. Although clearly futuristic, the story seems to be set in an unknown time on an unknown world. One possibility is that the Panzer Dragoon games are set on a world other than Earth or a future Earth that is beyond all recognition. Other possibilities include the second moon being an asteroid pulled into orbit by the planet’s gravity, or a “Death Star” to use the Star Wars term (a spherical satellite) created by the Ancients themselves. The Ancients were seen as gods because they could accomplish almost anything with their advanced technology, so it’s not out of the question.