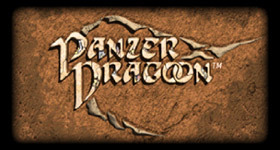 Panzer Dragoon was one of the earliest titles for the Sega Saturn, and it quickly showed what Sega’s new 32-bit system was going to be capable of; the game itself was a shoot ‘em up that cast the player as a dragon rider, flying over fantastical landscapes and battling equally unique foes. A PC version was released in 1996 for Microsoft Windows, and in 2006 an enhanced version was brought to Sony’s Playstation 2. The complete game, based on the PC version, was also included as an unlockable bonus in Panzer Dragoon Orta.

Several aspects set Panzer Dragoon apart from similar games that had gone before it though, most notably the way that it used the third dimension; while previous rail shooters such as Space Harrier and Star Fox simply had the player facing forwards as they moved through a three dimensional world, Panzer Dragoon allowed the player to turn and look all about them, and shoot down enemies approaching from all directions. The nature of the world in which the game took place was impressive in of itself, too; unlike the fairly unimaginative settings of most early 3D games, the post-apocalyptic Panzer Dragoon world was a place of haunting atmosphere. The enemy designs for the various bio-mechanical creatures and airships were surprisingly original and artistic, and the overall effect was a kind of surreal wonder that continued throughout the series.

Long before the events of Panzer Dragoon took place, the planet was reduced to a wasteland by wars fought with terrible destructive technologies. Thousands of years later, the survivors are forced to live in a barren world overrun by monsters of all shapes and sizes: creatures that are the genetically engineered weapons of the distant past. The ruins of the “Ancient Age” still litter the landscape, holding within them the keys to the god-like technologies of old.

Eventually, a human civilisation emerged that began to exploit these forgotten technologies. With fleets of flying battleships constructed from Ancient antigravity engines, this civilisation spread across the face of the world with an iron fist; it came to be known only as “the Empire”.

In time, the Empire discovered one of the ultimate monuments of the Ancient Age: an immense structure known as the Tower, which housed unimaginable potential for destruction. However, as the Imperials set about trying to breathe life into the Ancient monolith so that they can use it for their own ends, a mysterious dragon emerged from the shadows of the past to ensure that the Tower was never revived.