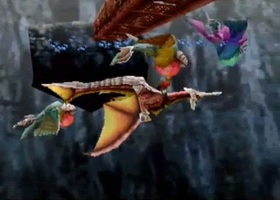 Pattergo were flying mutated monsters who lived in the valley regions of the Panzer Dragoon world. They are the first enemy that players controlling Edge and his dragon encounter in Panzer Dragoon Saga and thus do not put up a significant challenge. The defeated enemy data on the pattergo describe them as peaceful creatures, and they did not hunt their prey like many other mutated monsters that Edge encountered. Pattergo were not omnivorous and it appears also that they were not herbivorous either since the defeated enemy record for them states that they, “feed on rocks and minerals”, however this does not rule out that they ate some plants as well. Nonetheless, the pattergo did have one form of defense in the form of a green orb that they could fire at potential threats, but these orbs could only be fired from the front; the sides and back of a pattergo group were safe areas. It is not clear why Edge felt the need to destroy these creatures when he encountered them, but it can be speculated that he saw their green orb attack as a threat or simply killed them out of habit. 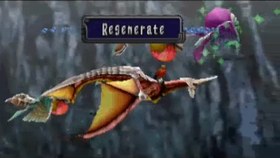 A pattergen heals herself after being attacked.

Pattergo travelled through the valleys in small communal groups. Amoung these groups was a single female pattergo known as a pattergen. She had distinctive purple, blue, and green colours that made her stand out from the males in the group who had less florescent colours. The pattergen had no form of attacking, and her role was to nurture others in the group. She was able to do this by healing herself or her companions. Players controlling Edge are able to defeat groups of pattergo faster if they kill the pattergen first by individually targeting her with Edge’s gun. By destroying the pattergen, the health of the remaining pattergo could not be restored, allowing multiple pattergo to be taken out by the dragon’s lasers without hinderance.