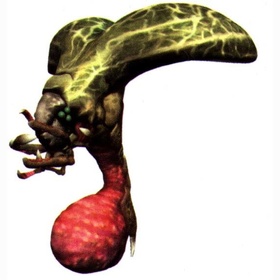 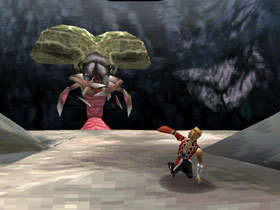 Gash runs for his life.

The arachnoth attempts to devour the dragon.

The charge knocks the arachnoth unconscious.

With Gash hiding in a nearby cave, Edge took on the arachnoth using the power of his dragon. The arachnoth was a large creature and heavily armoured. He was dangerous from the front, and had the ability to perform an attack called “devour” in which he would try to eat Edge and the dragon before spitting them back out. The arachnoth could also use digestive fluid and his tentacles to inflict damage onto the dragon and could also ram into opponents. When charging, the arachnoth would crash into a nearby valley wall and temporarily knock himself unconsious. He was evidently powerful but not very smart. Players controlling Edge can use this opportunity to fire lasers at the newly exposed weak spots on the arachnoth’s rear without fear of being attacked in the process.

When the arachnoth was defeated he struggled in midair for a few moments before letting out an angry cry. The arachnoth flipped upside down and let loose a fountain of red as he fell into the valley below. Edge exclaimed, “I sure hope that thing is dead!”