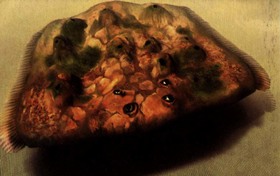 Lathums were huge mutated monsters that lived in the desert areas of the Continent. They lurked under the desert sands and fed on unsuspecting worms. Lathums were known for their distinctive flat appearance, bubbling skin covered in slime that emitted scalding steam from pores located on their backs, and a foul odor. 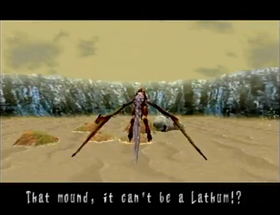 A lathum lurks under the sand of the Garil Desert.

Lathums were first introduced to players when Edge and Gash encountered a lathum lurking in the sands of the Garil Desert. At first they saw what simply appeared to be a mound, but Gash soon recognised it as a lathum. He spoke of it being “a” lathum, implying that Team Andromeda had already decided that there were multiple lathums in the Panzer Dragoon world at the time when Panzer Dragoon Saga was developed. Moreover, Gash knew the strategy for defeating lathums, implying that the Seekers had heard of or encountered lathums previously. Edge had not heard of lathums before, although Gash appeared to be quite knowledgable of the creatures. Gash described them as “the most disgusting thing alive” and commented on the lathum’s horrible smell. 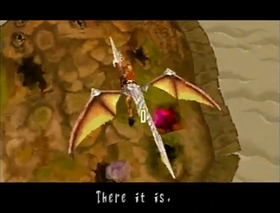 The lathum is a sub boss in Panzer Dragoon Saga, and the battle is the first time that players encounter a boss without any safe areas (which display as green on the radar). Edge wondered how he could defeat something as big as the lathum, to which Gash replied that he had to find the lathum’s weak spot. The weak spot appeared in a seemingly random location of the lathum’s back and when exposed it turned a pinkish red colour. Players controlling Edge could then shoot the weak spot and inflict significant damage on the lathum. The lathum was not without its defences, however, and produced heat breath and scalding breath attacks which inflicted significant damage on Edge’s dragon.

When Edge defeated the lathum, it disappeared from view, perhaps to die or nurse its wounds. Since the lathum had been located nearby a worm passageway, the worms could enter freely once again. A red worm broke open the passageway which allowed Edge and his dragon through the passage into the next area of the desert. It is unclear whether the worm was thanking Edge for defeating the lathum or whether it simply wanted to access the passageway which it was only able to do once the entrance was clear. 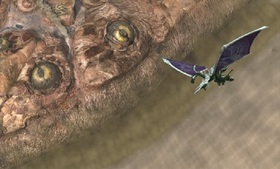 The lathum that Orta visited was home to a tribe of people called the Wormriders. On the back of the lathum the Wormriders had built their den, a small settlement of Wormrider huts. It appears that unlike the back of the Panzer Dragoon Saga lathum, the surface of this larger lathum was inhabitable by human beings. Not only did the lathum’s back feature the Wormriders’ den, but it hosted an ecosystem of mountains, rivers, trees, and perhaps non-human animals.

The Empire fires at the lathum.