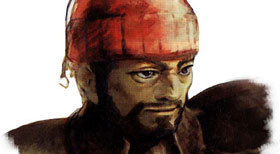 Edge’s Captain, who goes unnamed in Panzer Dragoon Saga, was a hired mercenary who received commission from the Empire to guard Excavation Site #4. Most of what is revealed about his background to players comes from the Leader’s Note, a diary that he wrote prior to the events of Panzer Dragoon Saga. Edge received the diary upon his Captain’s death.

Before Azel was discovered, Edge’s Captain believed that the Empire was desperately seeking something at Excavation Site #4. However, his group of mercenaries were kept in the dark. He believed that the job that he had been assigned would be easier than he had originally thought due to the large wind net protecting the excavation site from monsters.

Edge’s captain was the Edge’s caregiver and thought of the boy as his son. Indeed, he often told Edge that he thought of him as his son, but regretted that he had never done what he considered a parent ought to do. 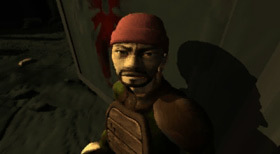 The Captain in his dying moments.

He did not consider himself smart, but believed that Edge was a smart kid who ought to be enrolled in a school. Edge’s Captain spoke with the director of Excavation Site #4 who recommended that Edge be enrolled in a normal school before going to the Imperial Academy. Edge’s Captain was concerned that he would not be able to pay for the schooling as it would cost a lot of dynes and he was getting older. He planned to take Edge to the Imperial Capital once the job was complete. He also considered studying himself because he worried that Edge might be ashamed of him when he grew up.

Shortly before Edge discovered Azel within the ruins at Excavation Site #4, the mercenaries encountered a pure-type monster. When Edge went after the monster, his captain yelled at him asking him if he was out of mind and to run rather than fight. When Edge saw Azel he is entranced by her beauty, but his captain broke him out of his daze by yelling at him to shoot the floor below the monster. Edge took his Captain’s advice and shot the floor below the monster, knocking it into the ruins below. Edge’s Captain recommended that they leave the ruin quickly as the monster was not dead yet.

When Excavation Site #4 was attacked by Craymen’s Black Fleet, Edge’s Captain was shot by Zastava. Edge yelled in horror as his Captain fell to the ground. He survived long enough to see Edge one last time, surprised to see him again as he had seen Edge fall off the bridge. He warned Edge to avoid the Empire as they did not like loose ends and would kill him. It is not clear whether he had seen the dragon, but he advised Edge to go after Craymen regardless. He believed that if Edge could recover Azel from Craymen he may have a chance of not being killed by the Empire.

Before Edge’s Captain died, he asked Edge to reach into his pocket which contained his diary. The last words in his diary were, “Will Edge ever call me… father?”