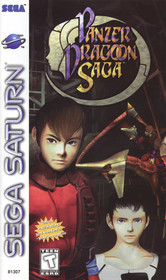 The NTSC version of Panzer Dragoon Saga. Panzer Dragoon Saga had a low production run, with relatively few copies of the game being made in comparison to other Saturn titles. Because of this, it is now become a fairly rare game that fetches quite a high price on the secondary market.

This version of the game comes in a normal NTSC Saturn case, with the second, third and fourth discs in separate cardboard sleeves that sit inside. There are apparently two different varieties of these sleeves - some white, and some black - but it seems that both kinds were being used right from the game’s release, so they don’t signify earlier or later production runs.

Panzer Dragoon Saga save files can be mixed and matched with different versions of the game. For example, you can use disc 1 of the PAL version, and carry on playing your save file using disc 2 of the NTSC version with no issues.