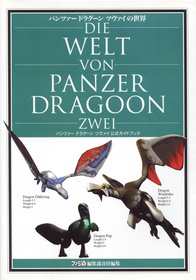 The official player’s guide for Panzer Dragoon II Zwei; the title is in German, and translates as “The World of Panzer Dragoon Zwei”. The first half of the book contains background information on the Panzer Dragoon world (presumably provided or perhaps written by Team Andromeda), and it includes official artwork and renders of the various monsters, ships and environments seen throughout the game. The second half focuses on gameplay, and features walkthroughs of each episode that are aided by maps.