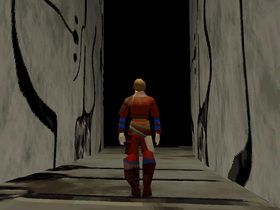 Ruins Bottom Floor is the first playable location in Panzer Dragoon Saga. It is an on-foot section where the player controls Edge rather than the dragon.

The ruins were located beneath Excavation Site #4, deep below the surface of the planet. When Zastava shot Edge, he fell from a bridge into the ruins below. Edge’s lifeless body fell into water and after the Divine Visitor’s orb resuscitated Edge’s submersed body he swam to a nearby platform, finding himself in the deep cavern.

The walls of the ruins contained the definitive grey and black pattern used in Ancient designs. The ruins contained several white Ancient obelisks which held items that Edge took, including an Ancient gun with a dragon design. Edge used this gun throughout his quest, upgrading it with various attachments. 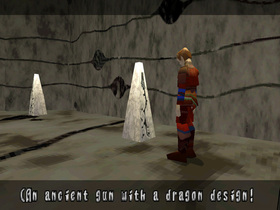 Also of note was a large engraving of a dragon on the righthand (from Edge’s entering point) wall. This dragon crest may be related to the origin of Edge’s dragon, but fans can only speculate on this point.

The bottom floor of the ruins contained an elevator which Edge activated by accessing two levers on either side. The elevator was a single platform with no walls or railings. It did not take Edge all the way to the surface, but it is likely that there were other elevators that would have transported Edge between floors.

When Edge arrived at the floor above, he was attacked by a number of pure-type monsters. The gun that Edge found on the bottom floor failed to function, and the monsters would have devoured Edge. However, the dragon appeared from above just in time and annihilated the monsters with lock-on lasers. After giving Edge a vision, the dragon safely lifted Edge out of the ruins.