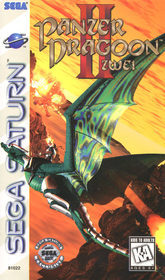 The NTSC game disc also has the region code for Japan on it, so it can be played on a Japanese Saturn as standard.