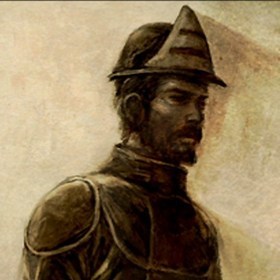 Letral Naus was Iva’s father and a researcher at the Imperial Academy, where he was working on the dragonmare project. One day he told Iva that he was leaving for the Seeker city in Yelico Valley to collect important research materials. These “research materials” were in fact none other than the half-drone known as Orta, but Iva was unaware of this. Iva did however know that his father’s research project involved the creation of weapons. He argued with his father, calling him a murderer and telling him that he only cared about his work. Before his father left, Iva told him that he never wanted him to come back. That night, Iva’s father was killed during the attack on the Seeker city. Before his death, Letral Naus had arranged for one of his co-workers to give his son an amulet. Iva received the amulet, but didn’t yet realize the true relevance of the item he has received.

Iva eventually found out the amulet actually contained a letter from his father. In this letter, Letral Naus explained why he was involved in the dragonmare project. Iva carried a deadly virus for which he had to take medicine every day. This medicine was derived from the fluids of bio-engineered monsters, but the virus eventually grew immune to it. Letral Naus kept searching for more powerful bio-engineered monsters to create a stronger medicine, but eventually he couldn’t find any bio-engineered monsters that were suitable for creating a medicine strong enough to counter the virus. This led him to work on the dragonmare project. Using the fluids from these newly engineered creatures, he managed to create a medicine strong enough to keep his son alive. Although he knew it was wrong to unleash such monsters on the world, Letral Naus wouldn’t just let his son die. At the end of his letter, he told Iva not to give up and try to find a cure for his disease. Moments after Iva read the letter, the prototype dragonmares attacked the Seeker’s den where Iva was staying. As his father had helped to create the dragonmares, Iva decided it was now his duty to destroy them. Although Iva ultimately stopped the dragonmares’ attack on the Seeker’s den, it is implied (although not confirmed) that he died shortly afterwards, as he had used up all of the medicine his father made for him.

Panzer Dragoon Orta never reveals why Letral Naus left Iva a letter container that was used by tribes out in the frontiers, or how he acquired it. These containers were difficult to open, and it is only because of the Seeker, Emid, that Iva learned that it actually contained a message. Letral Naus may have used this type of container to try and reduce the chance of anyone discovering the message before it reached his son. Perhaps he had hoped that Iva would eventually discover the message by himself, but this did not end up being the case.