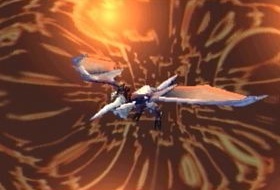 This entry is about the location Sestren Data Circuit. For the character, see Sestren.

The Sestren system is one of the biggest mysteries of the series. Very little is revealed about the true nature of Sestren, and there does not seem to be an easy definition of what it exactly is. Although one could think of Sestren as a computer network that holds all the recorded information and memories of the world, the true nature of this strange place remains shrouded in mystery.

In Panzer Dragoon Saga, Sestren was enemy territory, as it housed the central Sestren being that was serving the will of the Ancients. Sestren (the being) cast the Heresy Program out of Sestren (the place) as witnessed by players in Sestren’s memory orbs at the end of Panzer Dragoon Saga. The Heresy Program then entered the surface world (the physical world outside of the Sestren network) and became one with a young coolia named Lagi, creating the Heresy Dragon.

Sestren was first revealed to players controlling Edge by a member of the Seekers, a compiler named Zadoc. He told Edge that Azel could open a gate to Sestren, which he read about in some Ancient records. The Ancient records defined Sestren as “a group of astral passages beyond our world that connects all of the Towers.” Zadoc believed that Azel must know the way to Sestren, however she appeared to know little about the purpose of Sestren itself. 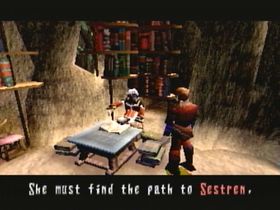 When Zadoc told Edge about Sestren, he spoke as if destroying the system would free the world from the will of the Ancients. Specifically he said of Sestren, “It’s the place that controls all of the Towers. If your dragon can destroy Sestren, the world will be free from the evils of the Ancient Age.” However, Zadoc may have been referring to Sestren the being, as the terms are often used as if they are interchangeable throughout the series.

Edge and Azel descended to the bottom floor of the Tower of Uru where Azel prepared to open the gate to Sestren. Upon opening the gate, the entirety of the Tower began to melt, as Azel simultaneously destroyed it in the process. It is unclear exactly how Edge and his dragon were transported as this was shown off screen. 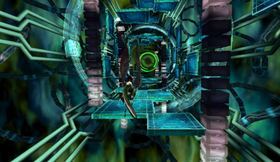 Memory cells inside of the Sestren data network.

Orta and her dragon were transported into Sestren from a kind of teleporter that they discovered at the bottom of an Ancient ruin. In Tower Report 3, Zadoc wrote that “Sestren can be reached from any Tower” so it is possible that this ruin was also a Tower, however this is not confirmed in Panzer Dragoon Orta. When entering the teleporter, a voice said, “Gene base code 12 confirmed. Welcome home, master.” It is possible that the voice was referring to the dragon, as the dragon’s roar is later referred to as the “Master’s voice.”

Upon entering Sestren, Orta and her dragon travelled through some sort of organic veins while anti-bodies tried to attack/analyse the pair. They eventually reached a memory block that transported them to different memory cells. It was in these memory cells that the Sestren system stored information from the surface world. Different voices could be found in the memory cells from characters of the Saturn Panzer Dragoon games. 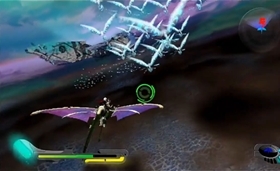 Although entering Sestren required a gate to opened, exiting the network appeared to merely transport the individual from anywhere within Sestren back to the surface world. When Abadd left Sestren and was transported to the Cradle, Orta told her dragon that they had to stop him. The dragon roared and the voice of Sestren responded that the “Master’s voice” was confirmed and that the system would forward the two to block 2-8-9, which was the location of the surface world where the Cradle was located.

According to Panzer Dragoon Orta’s encyclopaedia, the surface world may have been nothing more than a testing ground for the Sestren itself. A testing ground for what remains unknown, as is the author of who made the speculative remark. Three of Panzer Dragoon Orta’s minigames shed light to the true nature of the Sestren. It was capable of running a World Analysis System, using information from within its memory cells. In this system, it could simulate battles with a Continuous Battle Simulation Program. That may have meant that that the Sestren system was capable of simulating a battle between any of the creatures or weaponry it had stored in its memory cells.