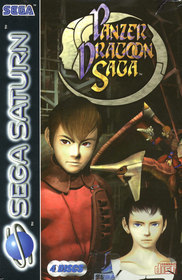 As with the NTSC version, the PAL version of Panzer Dragoon Saga had quite a limited production run and has become similarly rare.

The PAL version of Panzer Dragoon Saga is not actually PAL optimised, so when played on a PAL Saturn it runs slower than the NTSC versions of the game. This causes small graphical glitches to occur in some cut-scenes, too. However, this version of the game does run perfectly on an NTSC-J or NTSC Saturn (provided that you have a way to play imports, of course).

Panzer Dragoon Saga save files can be mixed and matched with different versions of the game. For example, you can use disc 1 of the PAL version, and carry on playing your save file using disc 2 of the NTSC version with no issues.