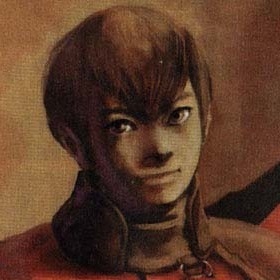 Edge was first introduced to us in the introduction of Panzer Dragoon Saga. The Captain of an Imperial dig site, Excavation Site #4, had raised the fifteen-year-old1 orphan like a son. Because of the Captain’s lifestyle, Edge became a mercenary. The ginger haired boy longed for a life of excitement beyond “guarding this dump”, a wish that came to him when the drone Azel was unearthed from the Ancient ruins. When Edge first saw Azel asleep in her Ancient hibernation chamber he thought that she was beautiful. However, he did not get to meet her straight away because soon after Azel’s discovery the Black Fleet, a group of rebels led by the Imperial traitor K. F. Craymen, attacked Excavation Site #4. Edge’s Captain and fellow workers were massacred by Craymen’s psychotic henchman, Zastava, leaving Edge yearning for revenge. Drawn by a sense of duty to hunt down his Captain’s killers, Edge ran headstrong after Craymen’s ship. However, Zastava shot Edge in the stomach, leaving him to fall unconscious (or perhaps dead) into the abyss below.

"The soul who dwells inside Edge."

It was soon after these events that the Divine Visitor’s white orb entered Edge’s body. It is unknown whether Edge was already dead by this point, or merely unconscious. Nevertheless, the Divine Visitor revived him. When Edge awoke and swam to the surface, he was surprised to be alive, and looked for a way out of the ruin. He encountered a pack of pure-type monsters about to kill him, but at the that moment lasers erupted from above and he encountered the Heresy Dragon. After sharing a vision of his mission with Edge, the dragon lifted Edge into the air and they departed on their way.

"I merely set the stage. You must fulfill your own destiny, in your own way."

Craymen was a character who was the centre of Edge’s focus throughout most of Panzer Dragoon Saga. Craymen’s ‘kidnapping’ of the drone Azel and his invasion of Excavation Site #4 caused Edge to unrelentingly hunt down the rebel leader. However, as Edge was pulled deeper into the war between the Empire and the Black Fleet, he began to question who the real enemy was. After seeing the Empire’s flagship Grig Orig destroy the village of Zoah, Edge’s meeting with Craymen in the Tower all but changed his mind. Craymen’s goals become clear and Edge was forced to choose between helping those who are trying to save the world and those who were destroying it. He assisted Craymen when the Empire attacked the Tower, however he told Craymen, “I haven’t forgiven you yet”.

One of the first characters Edge encountered after his friends were killed was Skiad Ops Gash, a character who was later confirmed to be the leader of the Seekers. Edge became deeply involved in the Seekers’ purpose and their struggle against the Ancient technology. This showed that Edge was willing to revise his outlook, as he had been brought up to believe that they were just a group of uncivilised tomb raiders. It was by meeting with Gash and the Seekers that Edge learnt much of the truth surrounding the Ancient Age. At the end of Panzer Dragoon Saga, Gash used Edge and his dragon as a weapon against Sestren, but it was Edge who chose to risk his life by entering the astral passages to face the unseen terror that lurked within.

Like Lundi before him, Edge’s quest was one of vengeance but soon became bound to the dragon’s goal of reaching the Tower. Edge formed a close bond with his dragon, perhaps more so than previous dragon riders. Kyle and Lundi were both parted from the dragon once their missions had come to an end, but this is questionable whether this would have happened to Edge should there have been a choice. The bond between Edge and his dragon was so great that even after the dragon had fulfilled his mission, he returned to the mortal world to protect Edge’s child, Orta, something that he chose of his own accord. Although Edge was chosen by the dragon because of his link to the Divine Visitor, it could be argued that Edge was important to the dragon due to their bond as well.

In the English version of Panzer Dragoon Saga, Edge was attracted to the drone Azel and she had feelings for him in return although it was tragically too late before she had a chance to properly explore them. In their final encounter, Azel told Edge that she loved him. Edge promised to come back for Azel, but the epilogue to Panzer Dragoon Saga suggests that this never happened.

Edge’s fate after his encounter with Sestren still remains unclear, even after the release of Panzer Dragoon Orta. In Panzer Dragoon Orta, a recording from Azel explains that she used a human’s DNA combined with her own to create a human/drone hybrid named Orta. Azel’s message tells Orta, “My child… you carry my spirit. And his spirit, as well…”. It is strongly implied that this human was Edge, although it is not explicitly confirmed, which has caused fans to speculate that the father might have been someone other than Edge.2

Azel’s fate was not revealed in Panzer Dragoon Orta but judging from the recording that she left Orta it is unlikely that her search for Edge had a happy ending. Azel told Orta that her search was “fruitless”, but it is unclear if she meant that she never found Edge or that she had found him, but he was dead. Fans have speculated that Edge died or would have died from Zastava’s gunshot and that the Divine Visitor’s orb only revived or kept him alive long enough to complete the dragon’s mission, however this is not confirmed in either Panzer Dragoon Saga or Panzer Dragoon Orta.3 The drone Abadd stated that Orta was “created from her genes and the human’s gene data within Sestren” but made no mention of whether Edge was actually present during Orta’s creation, or merely his gene data.