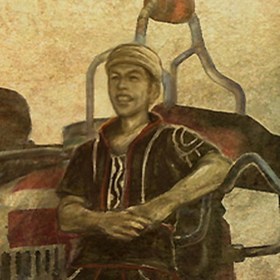 Like Emid, Noof was one of the Seekers living in their new den in the Forest of Mutation, where they settled after their escape from Yelico Valley. But unlike Emid, Noof didn’t trust Iva at first, and found it suspicious that he remained unharmed from the crash of his ship.

After Iva completed the trial Chief Damad had given him to prove his worth, Noof eventually accepted Iva as a part of the Seeker community. Like most Seekers, Noof knew a lot about the technology of the Ancients. He used that knowledge to equip Iva’s pod with an Ancient engine, making it fly a lot faster.