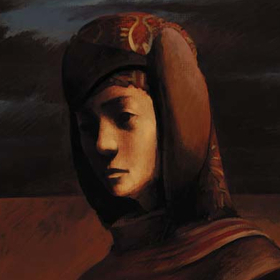 Jean Jacque Lundi was the first dragon rider in the Panzer Dragoon trilogy, setting into motion a chain of events that would one day free the world from the will of the Ancients. He was the protagonist of Panzer Dragoon Zwei and raised and named the dragon Lagi. The games do not reveal what ultimately became of Lundi after he ended his adventure, other than that he became the leader of the Seekers and adopted the name Skiad Ops Endow. He shared the same fate as all the dragon riders thus far, because players never saw him again. The knowledge he gained from his journey helped to steer the direction the Seekers chose to go in, in their struggle to set themselves free from the legacy of the Ancients, but further information is not revealed about Lundi’s fate.

Lundi grew up in Elpis, a village located south of the Imperial capital and just south of what used to be the border separating Meccania and the Empire. His family bred coolias for a living and he naturally lent a hand. Coolias were two-legged beasts of burden indigenous to the Panzer Dragoon world akin to the horses of our own. His village enforced a brutal code to kill all mutants without exception to prevent the bio-weapons responsible for reducing humanity to a few tribes during the Ancient Age from coming back to haunt them.

Lundi looks down upon baby Lagi with a thoughtful stare.

Lagi looks up at Lundi and flaps his wings in anticipation of flight.

A female coolia in Lundi’s care died giving birth to a mutant coolia that Lundi couldn’t help but hide from prying eyes, not out of defiance, but rather because his sense of compassion wouldn’t allow him to do anything else. Like other mutant coolias, a patch of translucent blue-white light said to be ominous among his people glowed brightly on its throat, but unlike other mutant coolias, this one also had a pair of wings. Lundi regretted breaking the village’s code, but he couldn’t bring himself to kill the little coolia who was in no position to harm anyone; Lundi couldn’t see how a mere patch of light could be harmful, and he named the winged coolia Lagi to express his growing fondness for the creature. Lagi reminded Lundi of a legendary dragon written in village scripture, and if Lagi was indeed one such dragon, then his dreams of becoming a dragon rider may one day come true. To cut a long story short, they became friends.

Shelcoof defines the phrase death from above by burning Elpis to the ground.

A blinding shockwave hits Lundi as he rides Lagi outside the village.

Lundi was a watchful thinker. He makes his cynicism clear when he questions the true reasons his village kills harmless mutant coolias: because they cannot be tamed or sold. Lundi tried to make an excuse for his people’s actions by saying the mutant coolias are believed to be a bad omen, which although true, was also an excuse to kill what was useless. Lundi also has a noticeable conscience; he blamed himself and his foolish desire to become a dragon rider when Shelcoof turned Elpis to ashes. His thirst for vengeance and Lagi’s power was all he had left to fill the empty void inside of him left behind by the destruction of his home.

Lundi and Lagi can only watch helplessly as Elpis burns.

Arrows of light explode from Lagi's mouth but are too weak to reach the ship.

Lundi discovered the true significance of the blue-white light that the villagers of his former home feared so much when the green patch of blue-white energy on Lagi’s neck began to glow even brighter and a ball of green energy began forming in his mouth by sucking in energy. Lundi was unaware of what was happening and what was going to happen next, but the true meaning behind why the light was considered a bad omen was not lost on him.

The ball soon burst into three separate energy beams, or arrows of light, which blast their way out of the fledgling dragon’s mouth and towards Shelcoof as it hovered over the burning remains of Elpis. The arrows of light faded into the distance, not quite reaching their target, although Lagi may have fired them simply as warning. 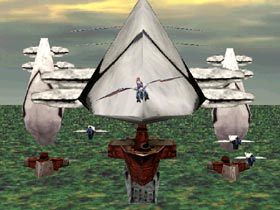 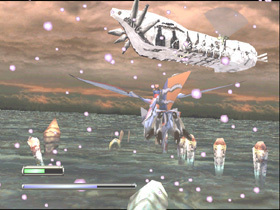 Lagi and Lundi never let Shelcoof out of their sight.

Shooting down hostile Imperial ships chasing his dragon weighed heavily on Lundi’s conscience; the fact he’d be forced to kill people frightened him more than conflict itself. So much so, he later ran from, rather than fought, Imperial forces refusing to give up in their non-stop pursuit of the dragon-rider pair, by retreating into the forest. By contrast, subsequent riders such as Edge and Orta don’t hesitate to shoot down hostile warships, and thereby callously disregard the potential orphans and widows they create each time in the process. Lundi preferred to run away which set him much further apart from them.

Lundi later wrote of becoming one with Lagi in his journals, and thus acting with a profound sense of duty that pushed his doubts aside. A world-changing mission was at stake, one that would save lives: destroying Shelcoof. Fighting for a greater good was a place in his heart where he no doubt found solace.

Once Lagi left Lundi after Shelcoof no longer posed a threat to the world, Lundi explored the wrecked Shelcoof and during his search found Lagi’s stone cold body. That is according to his journal describing the event found in Panzer Dragoon Saga, although in the finale of Panzer Dragoon Zwei players see Lundi discover a dragon crest within Shelcoof which he looked at and said the name “Lagi”. Lundi assumed Lagi would regain his strength one day and take to the skies again in a new body.

Lundi loses both his dragon and his gun in the normal cinematic endings.

Lundi literally picked up an Ancient pulse-laser gun from the burning ashes of his village at the start of his adventure, which was convenient for him and his dragon; finding a gun seemingly out of nowhere is a Panzer Dragoon tradition. Players can see the gun more closely when Lundi drops it while separating from Lagi in any of the normal endings. It looks similar to other Ancient hand-held weapons that people have seen throughout the series, and seems familiar in design when compared to other Ancient technology.

During the narration of Panzer Dragoon Zwei, Lundi is recalling parts of his journals during the cut scenes as if Lundi is looking back on the events. But it is not revealed at what future time he was telling the tale. 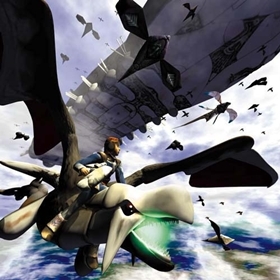 Lagi and Lundi attack Shelcoof at the end of Panzer Dragoon Zwei.

Before leaving his first rider, Lagi communicated with Lundi through a telepathic link with a sequence of images that were full of unknown meaning to him. Out of all the riders whom had received such a vision, Lundi was the only one to receive a vision about the Ancient Age, which reflected the bond of friendship they shared. Lundi felt compelled to share the knowledge his friend had entrusted to him, and took it to the Seekers. He felt that Lagi would always be with him as long as he put the knowledge to good use. Lundi became the leader of the Seekers, a group of insidious ruin raiders who love to portray their organisation as anything but organised in order to throw the Empire off their scent. He adopted the name Skiad Ops Endow, meaning Shadow Eye Endow, in order to conceal his former identity. Endow, is a verb in English, which can mean to provide something freely, further reflecting the role Lundi played in shaping the fate of entire Seeker organisation.

Lundi is in his mid to early late teens when Panzer Dragoon Zwei took place in the timeline (71 A.F.); Panzer Dragoon Saga is set roughly forty-eight years later. He could, therefore, have still been alive while Edge visited the Seeker stronghold near Zoah. (The Seventh Emperor survived the ravages of time, so could Lundi). The journal of Skiad Ops Endow states that he sent a Seeker to find the new dragon rider and give the journal to him, but it is not revealed how recent that diary entry is; the journal could be very old. It is not revealed how long Lundi had been the leader of the Seekers, but the new leader, namely Skiad Ops Gash, was mentored by Lundi. As Gash was the new leader, it is possible that Lundi died, went missing, or left the Seekers. Nevertheless, Gash did not reveal Lundi’s fate, unless it was something only found in the Japanese script.

According to the Drone Record not found in the game but on the game disc, Skiad Ops Endow was researching drones. Gash likely became the leader of the Seekers partly due to the knowledge of the nightmarish creations born in the Ancient Age he inherited from Lundi. As a rule, the person who assumed the mantle of Seeker leadership is someone who their enemies would never even think to suspect. The name Skiad Ops/Shadow Eye which is given to whomever is fit to lead the Seekers reflects a shadowy personality whose potential is always hidden from prying eyes under layers of deceit. When Lundi’s leadership came to an end, it seemed that Gash who is very hard to read as a person was the perfect choice for his replacement; no one in their right mind would suspect that a diminutive, one-armed, one-eyed man was capable of leading anything. Of course, there was no need to ask where the name Gash came from when the question is answered by a man who wears his scars with pride.

In Endow’s journal it is revealed that he only wrote down a fraction of the secrets Lagi entrusted to him. He mainly provided relevant information regarding the Tower network, such as their purpose and bloody history. Lundi knew much more, yet he kept the knowledge to himself.