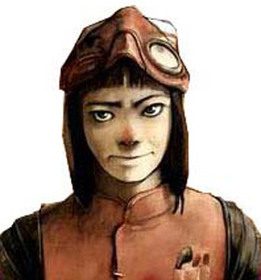 Paet is a major character in Panzer Dragoon Saga. He was born in the Frontier town known as Zoah, where he lived for most of his life until the town was destroyed. Paet escaped the destruction of Zoah in an airship that he built, later finding a new home among the Seekers.

Zoah was divided quite literally into two different village communities; one of these was the “Liberal District”, where travellers had settled and where outsiders came to trade and do business. The other was the “Holy District”, the older area of the town, whose heavily religious community shielded itself from the outside world and hoarded the “blessed” crops from the nearby Forest of Zoah. Paet belonged, at least technically, to the latter of these two communities.

The growing Paet lost respect for the Holy District’s way of life quite early on, however. He came to view the villagers’ religious beliefs as foolish and hypocritical, and in turning his attentions away from their supposed gods he apparently found his true calling: the mysteries of technology.

Paet took to tinkering with whatever he could lay his hands on, whatever could be of interest to him and give him greater experience. More than anything the technologies of the Ancient Age enthralled him, and he spent much time working with the minor Ancient Age relics that he had acquired, determined to unravel their secrets. His life became more or less devoted to technological research and experimentation, and as he also seemed to have considerable natural skill in this field, Paet became a very accomplished scientist and engineer for such a young man. 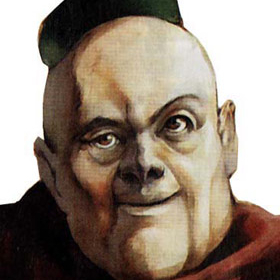 Paet’s father, Vaiman, did not share his son’s enthusiasm for such things though. Vaiman’s motivations for anything were apparently purely practical, and somewhat driven by greed and the desire for personal gain. Vaiman could not understand why his son would want to “waste” his life tinkering with old relics while he could have instead followed in his father’s footsteps - or at least tried to accumulate wealth and power a little more actively.

As Paet grew up he came to resent his father, to the point where he deliberately avoided his company. Paet even blocked up the stairs to his own room with a pile of junk in order to afford himself greater privacy; he would come and go from the high room of their rather immodest house by climbing an external rope ladder, and his portly father evidently had no intention of following.

Paet set himself up in a small storage yard in the Liberal District, and this workshop became his sanctuary during the day. A couple of the Liberal District’s citizens, Abner and Aldo, ran errands for Paet for a short time whereby they searched out minor relics in the local regions and sold them on to him. Unfortunately for them, Paet’s knowledge of Ancient Age relics was becoming quite advanced, and he identified most of the things that they brought back as worthless junk. Abner and Aldo soon gave up this approach to making money, reluctant to risk their lives in the course of finding worthwhile relics. 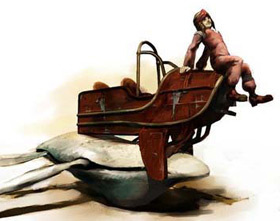 Paet sits on top of his ship.

Although the eccentric Paet was well known in Zoah, it seems that his reclusive lifestyle did not afford him many close friends. He did come to be looked up to by a young boy named Bezer, though - the grandson of Zoah’s high priest - who presumably admired Paet’s rebellious attitude towards the Holy District.

Bezer spent much of his time in Paet’s yard, helping him to restore the Ancient technologies that he worked upon. Paet’s most ambitious project became the restoration of an Ancient Age “float engine” that he had acquired, and he planned to repair the engine so that it could form the basis for a functional airship. Paet told Bezer that, in theory, the ship would be able to fly its pilot far away from Zoah when it was completed; the young Bezer wanted nothing more than to escape the stifling world of Zoah, so he was eager to assist Paet whenever possible.

Among the Ancient relics that Paet had restored was a terminal linked to an extensive monitoring network, and this allowed him to view and even produce photographic images of the surrounding Ancient Age installations. Paet was even able to photograph the Tower of Uru itself, and this printed image eventually fell into the hands of Edge. The young dragon rider had arrived in Zoah looking for information on the Tower that Craymen had gone to, and to him this picture was the most promising lead yet.

Initially taking Edge to be nothing more than an “inbred outsider”, Paet was quick to take advantage of the situation and to enlist the young man’s help. Paet made a deal with Edge, telling him that if he would recover some Ancient Age relics for him from the ruins at Georgius, he would tell him all he knew about the Tower. 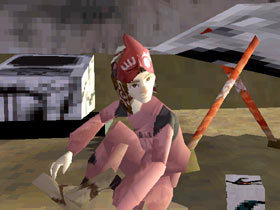 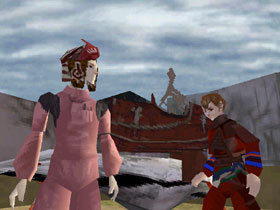 Edge is sent to collect spare parts for Paet.

The first batch of relics that Edge brought back were unfortunately little more than Ancient junk to Paet’s trained eyes, so he sent Edge out once again. Paet’s opinion of Edge changed considerably, however, when he decided to take a look at Georgius through his Ancient monitor; Paet saw Edge riding his dragon, which he had hitherto kept well hidden from the towns and peoples of the world. 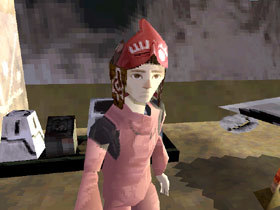 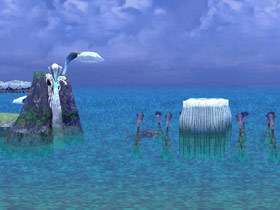 No longer concerned about whatever relics Edge may have found, upon his return Paet pleaded with Edge to let him see the dragon, which was, after all, one of the most monumentally advanced creations of the Ancient Age. Edge conceded to let him meet the dragon at some point, but he also asked Paet to fulfil his end of their deal and to tell him how to reach the Tower. Paet reluctantly admitted that he knew next to nothing about the Tower, and explained how he had captured the image of it through his monitor without ever going near the structure itself. Paet was able to direct Edge to the nearby ruins of Uru, however, which he had also observed through his monitor and which allegedly did lead to the Tower. 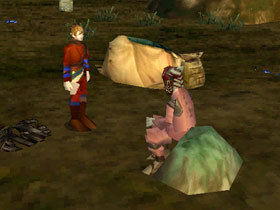 Paet next saw Edge on his return from the ruins, and he meet the dragon rider while he rested at a campsite in the forest. Although Edge had been unsuccessful in reaching the Tower from Uru, Paet had done some research while he was gone and he had made an important discovery.

Direct flight to the Tower was impossible due to the impenetrably dense fog surrounding the Tower’s location, but it seemed that this fog was created by an Ancient guardian airship called Mel-Kava. If Mel-Kava could be destroyed then the fog would recede, but unfortunately Mel-Kava’s location was also unknown. Paet was convinced that further records of the ship must exist in Zoah’s Holy District though, and he informed Edge of this.

It was at this time that Zoah came under Imperial observation, as the Empire were finally catching up to the renegade commander Craymen. Surprisingly enough, Paet was neither afraid nor particularly opposed to the Empire, possibly due to his lack of experience with them.

Having heard of the Empire’s access to advanced technology in the past, Paet had sometimes idly wished that he had been born in Imperial lands rather than in the unsophisticated depths of the Frontier. Paet had also decided that he would simply become an Imperial engineer if the Empire did take full control of Zoah. 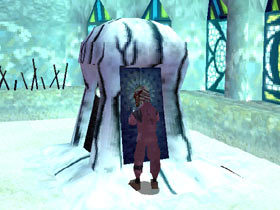 At his father’s request, Paet grudgingly introduced him to Edge; Vaiman had considerable plans in store regarding the young dragon rider, and his schemes were quickly set in motion. At that time Vaiman was the second most powerful man in Zoah (next to the high priest), and he entered into a deal with Edge that required the dragon rider to eliminate the nearby Imperial Air Force Post. In return, Edge would be given access to Zoah’s archives and records.

What Edge importantly gained access to was the relic known as the “Guardian Fire”, a piece of Ancient technology enshrined within the Holy District’s church. The Guardian Fire gave Edge a psychic vision of Mel-Kava’s location, and the relic completely fascinated Paet; he had never had access to it before, and he took to spending his nights examining the Guardian Fire in great detail.

By now, Paet’s small yet ambitious airship was finally nearing completion, and despite his father’s constant assertions that his hobby was a waste of time, the ship actually saved Paet’s life. When the Empire bombed and demolished Zoah in response to the destruction of their Air Force Post, Paet and Bezer were able to successfully escape in the small craft. 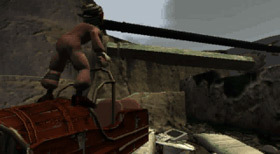 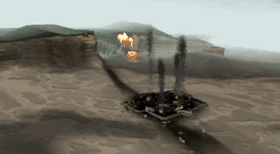 To Paet’s dismay though, the airship did not get far from Zoah before it plummeted earthwards and crashed. Fortunately the two of them were picked up by Gash’s Seekers, who took the injured pair back to their stronghold. Although Paet was intrigued by the Seekers and their society, he was ultimately shocked by the harsh reality of the world outside Zoah.

The Seekers encouraged Paet to join them, but at first he would not even consider the idea. The Seekers’ goals ultimately centred around combating the technologies of the Ancients, both those serving the will of their absent creators and those under the control of the Empire. Paet had watched such technology annihilate his village and he had watched it murder the people he had grown up with, though; he honestly didn’t think that the Seekers had a chance against that kind of power, and he feared that death would not be far away if he joined with them. Paet’s doubts were reinforced when the stronghold came under attack by the monsters that the Tower had released; the ensuing battle resulted in the deaths of many Seekers, and to his surprise Paet found that he genuinely missed Zoah. 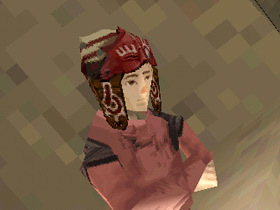 Paet in the Seekers' Stronghold.

In the end, however, Paet did come to reconsider those earlier judgements; it was the research that the Seekers did regarding the Ancient Age and the mystery of its technologies that ultimately changed his mind. Paet realised that he could genuinely be of help to the Seekers; for the first time in his life, Paet saw that he could actually use his skills to further a greater good.

Paet had met up with Edge again during his days at the stronghold, and when the time finally came for the Seekers to abandon the place and for Edge to return to the Tower, Paet bade his friend farewell. He confirmed that he was going to leave with the Seekers and become one of them, because, as he himself said, “Nobody knows when or how their life will end, only that it will. If the Seekers continue my research, my life’s work will make this world a better place.”