The Sky Rider was an anonymous humanoid male seen riding the armoured Blue Dragon in Panzer Dragoon (judging from the rider’s build and voice the Sky Rider is a he, at least). The name Sky Rider is taken from the heading “The Sky Rider Falls” in the English Panzer Dragoon manual for an introductory paragraph that summarizes the theme of the game, but his true identity is never revealed in the series. Whether the name Sky Rider (in capital letters) was meant to be an official name or title for the masked rider or not is unknown since every word in that particular heading is capitalized. He was a sky rider in a manner of speaking, but many fans have chosen to adopt the name Sky Rider because we never discover his true identity.

Green particles spiral out of the Sky Rider as if they were escaping.

The Blue Dragon cries out to mourn the death of his rider.

Panzer Dragoon takes place after Panzer Dragoon Zwei and the Sky Rider is the second dragon rider in the official timeline. However, other than the information fans have gathered by drawing conclusions from his appearance and actions, nothing is revealed about him; he is killed by the Dark Dragon before he can introduce himself properly (he is shot cleanly through the chest by a laser beam and thus fatally wounded). Before surrendering to death the Sky Rider lands his dragon next to Kyle, a hunter who stumbled upon the battle between him and the Dark Dragon, and reaches out his hand. There is much speculation surrounding the Sky Rider, so to keep things in perspective this entry contains a list of facts, and theories based on those facts.

Controversy Over the Sky Rider’s Identity

Was the Sky Rider the Same Person as Lundi?

One of the more popular theories among fans is that the Sky Rider was Lundi, the original dragon rider, only older, reunited with Lagi eighteen years after Panzer Dragoon Zwei (the time that passed between the two games according to the official timeline), and wielding an upgraded gun, or a new gun obtained from the Seekers.1 Panzer Dragoon Zwei was meant to tell the tale of the dragon’s humble beginnings and some fans have speculated that Team Andromeda intended to include a backstory for this unknown rider as well as his dragon or that Team Andromeda originally planned for the Sky Rider to be Lundi until they changed their minds. 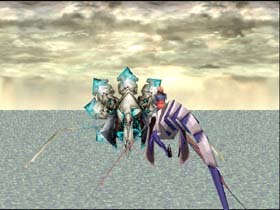 Lagi and Lundi battle the Guardian dragon of Shelcoof. 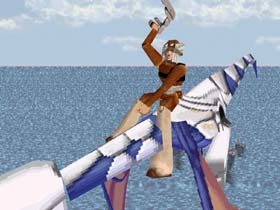 Kyle takes the reigns of Lundi's dragon in the next game.

At the end of Panzer Dragoon Zwei, players hear the voice of Lundi say “After all this, he is still with me…”, referring to Lagi. Some fans have speculated that he meant this literally, which could explain why Lundi mysteriously disappeared some time after he became the leader of the Seekers but before the events of Panzer Dragoon Saga.

Akihiko Mukayyama, one of the developers for Team Andromeda and the director of Panzer Dragoon Orta, stated in an interview that the Sky Rider was not Lundi. The interview was recorded on the Spanish site MeriStation, however only part of the interview was recorded in the Internet Archive, excluding the part where Mukayyama stated that the Sky Rider was not Lundi.2 However, a translation of a section of the Azel Panzer Dragoon RPG guide book called “The Dragon & the Mediator”, written from the perspective of the Seekers, confirms that following his initial encounter with the dragon, Lundi lived his entire life without being reunited with the dragon.3 This would apparently mean that the case is closed.

Was the Sky Rider a Drone?

The Dark Dragon chases the Blue Dragon and the Sky Rider.

The Blue Dragon and the Sky Rider narrowly avoid a fireball.

Another popular theory among fans is that the Sky Rider was a drone.4 Fans have noted that the Sky Rider looks strikingly similar to the Prototype Dragon’s drone rider.5 The suits of armor they are wearing are nearly identical with the sole exception of their contrasting color-schemes. The Sky Rider and the Dark Dragon’s rider appear to be drones who share the same design.

When the Dark Dragon soars past the camera, its drone rider comes into view.

When the Dark Dragon soars past the camera in Panzer Dragoon’s introduction sequence when it is chasing the Blue Dragon through a submerged ruin, the darker dragon’s masked rider comes into view for no more than a second, giving viewers the rare opportunity to examine him. On closer inspection, not only does the drone riding the Dark Dragon closely resemble the Sky Rider, but the gun he wields is a carbon copy of the gun wielded by the Sky Rider (pictured in Kyle’s hands). However, the Sky Rider’s gun could be of standard Ancient design and nothing more.

The Sky Rider has been likened to Azel many times because their overall appearances share similarities and few differences. The combination of boney white armor and black clothing underneath sets the Sky Rider apart from other riders, but when compared to Azel, a confirmed drone, Azel and the Sky Rider seem to look very much alike. Fans have drawn a comparison between the two characters and drawn the conclusion that the Sky Rider was also a drone based on their appearances, although it has never been confirmed.

Fans have speculated that Team Andromeda wrote the Sky Rider to be a rebel drone like Azel but never wrote a full or more detailed background story for him. The Sky Rider may have been a drone who was prepared for the Heresy Dragon in the Ancient Age. The moment Azel awakens the Tower of Uru, she bursts with green energy as if she is a floodgate bursting open, filling the whole room. The energy itself appears to be a darker green than what the dying Sky Rider releases, but proponents of the Sky Rider drone theory have used this as evidence to show that other drones can release green energy like the Sky Rider. Panzer Dragoon Orta’s encyclopaedia states that drones can appear to be identical to human beings which could explain the flesh-like color around the Sky Rider’s eyes.

Drones can become one with their dragons to communicate with them, and merge their minds with Ancient technology, but the full extent of this ability is not revealed to players from the actions of confirmed drones, or whether this ability to link with dragons can be used to speak telepathically with others or communicate in visions. It has been speculated by fans that the green energy seen spiraling out of the Sky Rider’s body was the drone’s life-force, since humans do not discharge energy from their wounds when dead or dying. The dragon’s bioluminary oscillator glows the same light green color when converting energy into bio-lasers, and fans have speculated that a drone’s body contains some of the same type of energy.

Was the Sky Rider an Anonymous Human?

Another possibility is that the Sky Rider was an anonymous human rider. The section on “The Dragon & the Mediator” in the Azel Panzer Dragoon RPG guide book, which was written from the perspective of the Seekers, gives more insight into the dragon program and states that, “there must be a human to make the decision put forth in the original goal of the program”.6 The passage further states that the chosen mediator must be a youth who was unfamiliar with the will of neither of the Technology Destruction Faction who created the dragon program or their rivals, the Technology Preservation Faction. This implies that the Heresy Dragon’s rider must always be a human youth who acts as a mediator who chooses the path that humans will follow. The passage further states that that the dragon’s second mediator was killed by the Prototype Dragon (the Dark Dragon), confirming that the Seekers knew about the Sky Rider when they wrote that a human was required to be rider of the Heresy Dragon. However, it is possible that the Seekers were wrong that a human mediator was required, just like they were wrong about the Divine Visitor’s identity.

Kyle reaches up, as seen from the Sky Rider's point of view.

In Dragon Book 2, Lundi wrote that while in combat, he felt as if he became one with Lagi. Furthermore, Panzer Dragoon Orta’s encyclopaedia entry called “Dragonrider” states that it appears that “dragons require the sharing of thought and senses with a rider to realize their full potential as a combat organism.” It is possible that if the Sky Rider was human he was able to communicate through the dragon in this way, explaining how he was able to send a telepathic message to Kyle warning him to stop the Dark Dragon from reaching the Tower. Fans have speculated that the green energy bursting from the Sky Rider’s chest wound when he is close to death could also be a product of the bonding process, or an inconsistency in the story that Team Andromeda later wrote around.

A human Sky Rider could have found himself some Ancient Age (or drone) battle armor. The Seekers were researching drones at the Uru labs (according to the Drone Record cut from Panzer Dragoon Saga), otherwise the armor could have been constructed out of Ancient relics like the armor that some of the Seekers wear.

The Sky Rider has sparked a huge amount of speculation. The mystery of the Sky Rider’s identity is considered an inseparable part of the series by many fans because it has forced them to wonder who or what he was. We may never know. Perhaps that’s the whole point.