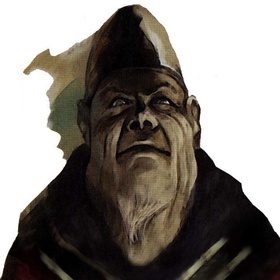 Despite the Seventh Emperor’s importance to the movement of the Empire in the Panzer Dragoon trilogy, very little has been revealed about his background before the original Panzer Dragoon took place. 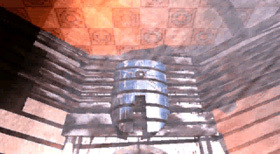 The Seventh Emperor’s appearance is portrays that of an emperor; he wore a red outfit of royal design, with a navy blue collar, and golden coloured rims around the outside of the fabric. In every scene that he inhabits, the Emperor can be seen sitting in his floating throne, a piece of furniture that enabled him to lift his body into the air. It is unknown how exactly the throne was able to hover above the ground. One possibility is that the chair used the same technology that is found in the float engines that the Empire used to keep their ships aloft. A similar throne (perhaps the same throne) in inhabited by the Sixth Emperor as seen in Panzer Dragoon Zwei.

One of the biggest discoveries that the Empire made took place three years after the Seventh Emperor inherited the throne. On the eighteenth day of the second month, the Empire discovered traces of energy in the West Sea that were later confirmed to be coming from the ultimate weapon: an Ancient Tower. According to Imperial legends, the Tower had enough destructive power to destroy the entire world. Determined to reawaken the Tower and claim its power as his own, the Seventh Emperor poured endless amounts of the Empire’s resources into an attempt to awaken the sleeping monolith. He believed that as the supposed ‘rightful heir to the Ancient civilisation’ his Empire alone should control the power of the Tower. As hard as the Empire tried to activate the Tower, it was only when two dragons entered the area that the Tower was awoken from its seemingly lifeless state. 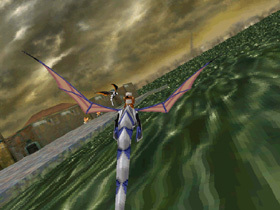 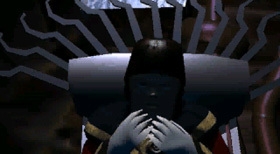 The Seventh Emperor reacts to the Imperial Capital's destruction. 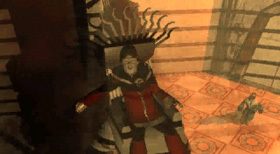 The Emperor commands that the Grig Orig go after Craymen.

The Seventh Emperor imposed a heavy tax on the residents of the Empire in order to help it recover from the losses that occurred after the Tower was discovered. However the Emperor did not relinquish his lust for the power contained within the Towers so easily. The Empire learnt that a drone was required to take control of a Tower and they began to desperately search for one. It was in Imperial Year 119 that mercenaries, hired by the Empire, unearthed the drone Azel, but she was taken from the ruins before they had the chance to use her. An Imperial traitor named K. F. Craymen, ‘stole’ Azel from an Imperial excavation site and as a diversion pulverised the Imperial Capital completely. The Seventh Emperor’s reaction to the deaths of so many of his own people’s lives wasn’t of pain or surprise. On the contrary he seemed to find the whole situation amusing (at least, his reaction was expressed outwardly with laughter) and the destruction of the capital did not appear to hinder his plans to control the Tower of Uru. Bent on controlling the Tower, which he believed would give him the power to control the world, the Seventh Emperor pursued Craymen personally by sending the Grig Orig, and a large proportion of the Empire battleships, after Craymen’s Black Fleet. 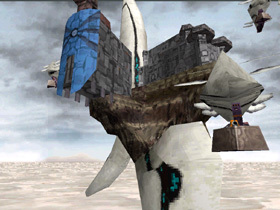 The flagship Grig Orig commanded by the Seventh Emperor.

Before reaching the Tower and capturing Craymen, the Empire overran the village of Zoah and demanded that they surrender to the Imperial banner. When Edge and his dragon destroyed the Empire’s nearby air force base, the Empire blamed Zoah and used the Grig Orig’s Imperial Cannon to slice the town into rubble. It is likely that the Seventh Emperor personally ordered the destruction of Zoah, and if that was the case then it reconfirms that he did not hold much value for human life.

Craymen eventually reached the Tower located near the lake of Uru, but the Empire was rapidly enclosing in on the Black Fleet and there was nothing that Craymen was able to do to prevent them. The Seventh Emperor managed to successfully trap Craymen, Azel, and Edge in a room inside the Tower. Realising that he could now have a dragon rider in his possession he announced, delighted, that he had some nasty experiments in store for Edge. Craymen pulled out a hidden weapon and tried to shoot the Emperor, however he was restrained by an Imperial officer. In retaliation, the Emperor fired a machine gun back at him, leaving Craymen gasping in pain. Overwhelmed with satisfaction at the thought that he would almost certainly control mankind’s future, the Emperor began to laugh mechanically, but not without first ordering Azel to activate the Tower. Overcome by grief at the fallen Craymen, Azel let out a scream that awoke the Tower from its deep slumber. The Emperor looked up in bewilderment, and at that moment a biomonster leapt from the roof and extended a claw that ripped through the Seventh Emperor’s torso, abruptly ending his life. 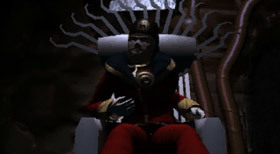 The Emperor after capturing Craymen. 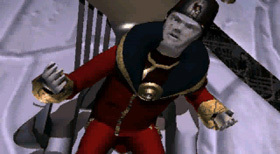 About to be torn apart by a biomonster.

How the Seventh Emperor Was Remembered 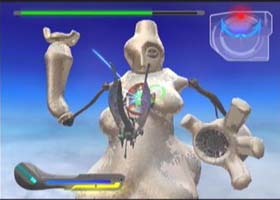 A statue of the Seventh Emperor.

Even though the Seventh Emperor’s part to play in Imperial history could be regarded as cowardly or even loathsome, he was remembered as one the greatest human heroes in the entire history of the Empire. According to historians of the new Empire (that was formed a number of years later), the deaths of many Imperial soldiers at the time of the Great Fall affected the Seventh Emperor profoundly and he sacrificed his own life using the might of the Grig Orig to destroy the Tower and many of the neighbouring ruins. A Guardian Festival was held once a year to celebrate this ‘victory’ of the Seventh Emperor and everyone in the Empire was required to go without food for the length of four full days and nights.

Panzer Dragoon Orta’s Pandora’s Box describes the Seventh Emperor as becoming “a god-like figure in the eyes of the people”. In fact, the people of the new Empire went so far as to construct a statue to honour his ‘heroic’ deeds. The statue appears to be fully Empire-made rather than constructed from left over materials from the Ancient Age. Orta and her dragon carried out a swift end to the statue’s legacy in the fourth episode of Panzer Dragoon Orta.