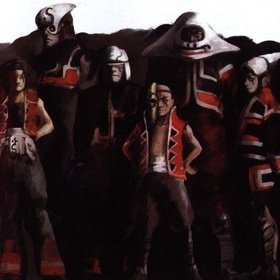 The Seekers were a highly structured, yet secretive group. They existed for hundreds of years, leading the world to believe that they are a band of tomb raiders. Although the Seekers spent much of their time ‘stealing’ (as the Empire called it) Ancient relics from the ruins, but the reason behind them doing this is not simply for wealth. The Seekers’ main goal was to reclaim the world. To do this, the Seekers researched as much of the Ancient technology as they could lay their hands on.

Overview of the Seekers

The Empire’s propaganda lead many to believe that the Seekers were a poorly organised and primitive tribe of thieves. While this may have been true to some extent, the Seekers often possessed a great deal of Ancient relics which lead the Empire to avoid using heavy weaponry on them in order to protect the valuable artefacts from the Ancient Age that they were carrying. The Seekers also perfected their tactics in guerrilla warfare, leaving even armed Imperial soldiers vulnerable to attack. For these reasons, the Empire considered the Seekers a threat to their civilisation. The Empire once protected the Seekers, as they were previously a similar tribe themselves, but eventually the Empire’s purpose became corrupted. They sought power for its own sake rather than to destroy Sestren. The Seekers became known as the ‘uncivilised people of the frontier’, a people whom the Empire wished to annihilate. 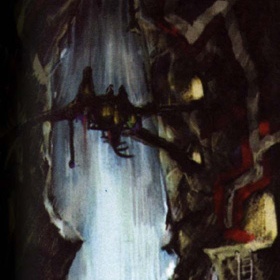 Deception was the way the Seekers lived their lives. The world believed that they lived like treasure hunters, that they lived for the thrill of the find. Some people in the Panzer Dragoon world believed that the Seekers would be punished for disturbing the sacred ruins of Ancient Age. The Seekers denied this. Although Seekers were made up of the survivors of different villages that were attacked by the monsters, they all shared a common goal. The Seekers were actually a secretive intelligence organisation, researching the Ancient Age for what they believed was the greater good of mankind. From their long years of discovery, the Seekers absorbed a great deal of knowledge of the Towers that had controlled the destiny of mankind since the Ancient Age. Ultimately, the Seekers wanted to destroy Sestren, the entity who controlled the Tower network, and in doing so free the world from the will of the Ancients. At the end of Panzer Dragoon Saga the Seekers succeeded in this goal, leading to an era known as the Great Fall. As a result of the Towers being shut down, the human population was reduced to less than half of what it once was. It is unclear whether the Seekers anticipated the death of so many fellow human beings.

Being a Seeker was a demanding lifestyle. It required significant training, dedication, and risks that many were not willing to undertake. However, since most of the Seekers had witnessed the deaths of loved ones, many were willing to fight the legacy of the Ancient Age. There were some who could not cope with the harsh lifestyle, however. Bezer of Zoah was perhaps too young to understand what the Seekers were fighting for and so left their protection and died as a result. 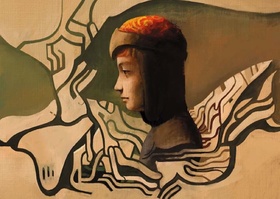 The first Seeker that players are introduced to is Lundi, the protagonist of Panzer Dragoon Zwei. Although he was not a Seeker in Panzer Dragoon Zwei, Lundi joined the Seekers sometime after Lagi, the Heresy Dragon, left him. Lagi entrusted the secret of his existence to Lundi before he departed. When Lundi became the leader of the Seekers he shared information with them about the Towers and the Ancient Age. It is unknown to what extent Lundi told the Seekers this information, but from reading his Old Diary it is clear that even players are not told everything of Lundi’s vision. It is possible that there were some Seekers, such as Zadoc the compiler, who knew more than what we are lead to believe.

The leader of the Seekers’ Stronghold went by the title of ‘Skiad Ops’ or in our tongue, ‘Shadow Eye’. Lundi was given the title of Skiad Ops Endow. It is unknown if he was given the title ‘Endow’ for his own safety as a former dragon rider, or whether the Seekers often gave their leaders new names. Regardless, the potential and true identity of the Shadow Eye remained a secret. This tradition does not appear to have been carried over into Panzer Dragoon Orta, however. In the fourth instalment of the Panzer Dragoon series, the Seeker leader was known as Chief Damad. 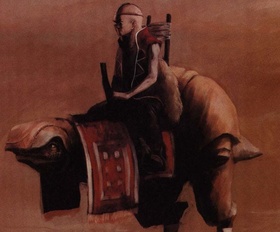 Gash, the leader of the Seekers, riding a coolia.

The main Seeker introduced to players in Panzer Dragoon Saga is Skiad Ops Gash, commonly referred to as simply Gash. He was the current Seeker leader around the time of the Great Fall. Most noticeable was the large scar over Gash’s right eye, concealed by a bony mask, Ancient in style. Lundi mentored Gash, and much of the dragon rider’s knowledge was passed down to him. Tired of being kept alive by the mistakes of the Ancients, Gash’s goal was to free the world from the horrors conceived from forgotten sciences of the Ancient world, the Towers and the pure-type creatures, which guarded the creations of the Ancients. At the end of Panzer Dragoon Saga, Gash’s goal was achieved: Sestren was destroyed. Gash sent the Heresy Dragon, his rider Edge, and the drone Azel to the bottom level of the Tower of Uru. Azel, who was could interface with that Tower, opened the gate to the Sestren system and Edge and his dragon destroyed the being who resided within it. 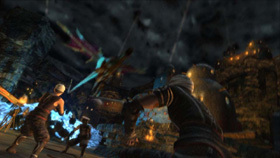 In Panzer Dragoon Orta, a tribe of Seekers were located in the Yelico Valley. It is unclear if they were the same group of Seekers who were once lead by Gash. Pandora’s Box confirms that Yelico Valley contained the main body of Seeker forces. According to Zadoc there were many Seeker villages, each acting as an excavation site for researching the Ancient ruins, so it could well have been a different group. The city of dome shaped huts had been built on the valley walls, their colour blending into the rock formations. Yelico Valley was, for some time, the central gathering point of the Seekers. Soon after Panzer Dragoon Orta begins, the reestablished Empire attacked the Seeker city. Although the Seekers did have some means of defence, they did not stand a chance against the Empire’s dragonmares. Hundreds if not thousands of Seekers likely lost their lives in the attack. 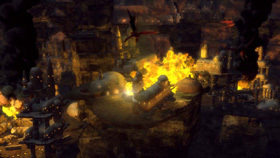 The settlement is completely destroyed.

The Seekers of Yelico Valley captured the half drone Orta and imprisoned her in a cage since she was very small. It is unknown why they did this precisely, but Orta recalled that she was chained there until she was needed for war. The behaviour of these Seekers appeared contrary to the Seeker treatment of Azel in Panzer Dragoon Saga. Azel, a full-blooded drone, was treated with respect and kindness, although she was also for some time guarded due to her value towards the Sestren mission. However, the Seekers of Yelico Valley were not entirely without remorse. When they appeared in Iva’s sub scenario, the Seekers appeared friendly towards the Imperial boy, although somewhat cautious. 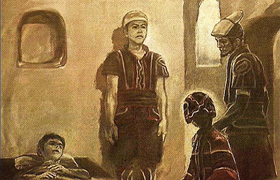 Chief Damad tests Iva to see if he is worthy enough to join the Seekers. 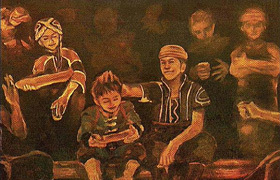 Emid and Noof celebrate with Iva in his welcoming party.

After Yelico Valley was invaded, the Seekers relocated to another den in the east, near to the Forest of Mutation. Emid, a Seeker whom Iva encountered, claimed that her group of Seekers lived a nomadic lifestyle, exploring the Continent and attempting to find methods of making it habitable to the people of the Panzer Dragoon world. Following the destruction of Sestren, it would appear that this was now the Seekers cause; despite the hardships and danger that their lifestyle created, the restoration of humanity became their new purpose.