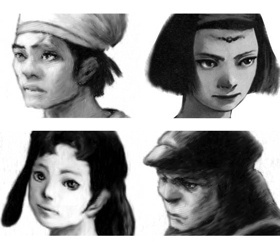 This entry is about the people of Zoah. For the location, see The Village of Zoah.

The people of Zoah were a community of townsfolk who lived in a walled village near the Forest of Zoah. They were annihilated by the the Empire’s flagship, Grig Orig, shortly before the Great Fall, although two residents of Zoah (Paet and Bezer) escaped in an Ancient airship. Jared, an undercover Seeker who ran a shop in Zoah, also escaped before its destruction. No other survivors were confirmed in Panzer Dragoon Saga.

During the time of Panzer Dragoon Saga, Imperial expansion had not yet covered the western part of the Continent, and the people of Zoah remained independent of the Empire. Unlike other towns that were constantly at the risk of being attacked by monsters, the people of Zoah had discovered an artefact called the Guardian Fire that was used to repel monsters. The Guardian Fire’s protection led the people of Zoah to believe that they were protected by gods. How much truth there was to the people of Zoah’s beliefs is debatable, but as history has shown, overconfidence in the supernatural can sometimes lead to the downfall of a conservative society that has assumed that it was safe from harm. 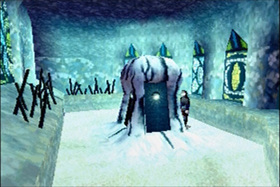 The Guardian Fire protected the people of Zoah.

The society was structured into two distinct classes, separated both literally by a wall and ideologically by cultural values. Travellers, hunters, and the lower class lived in the Liberal District, while the chosen religious community resided in the Holy District. The Liberal District is made accessible to players near the start of the second disc of Panzer Dragoon Saga. The Holy District became accessible on the third disc when Edge is given a pass by Viaman.

The Liberal District was a haven for retired hunters who wished for a life free from the fear of the biogenetic terrors. An’jou’s caravan was planning to settle in Zoah for this reason. It was also the home of people who had lost their homes due to Imperial expansion or other forces of destruction. Radgam, the hunter, referred to the people of Zoah as cowards. Regardless of whether or not his view was true, the Liberal District did act as a place where anyone could settle without fear of the monsters, an opportunity not many would pass up in the dangerous Panzer Dragoon world. 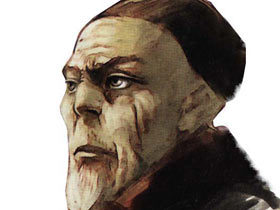 Damon, the High Priest of Zoah.

The council of the Holy District controlled the town, headed by a High Priest. When Edge visited Zoah the High Priest was a man named Damon, succeeded later by Paet’s father, Viaman. It appears that Zoah’s leadership was at least partially democratic, as the council voted to have Damon replaced by Viaman after Viaman sent Edge and his dragon to destroy the Imperial airforce base. However, it is unclear to what extent the residents of Zoah had a say in the council’s leadership; it is likely that only Holy District citizens could vote, or possibly only members of the council itself. Only one citizen with voting power was revealed in Panzer Dragoon Saga: Quitor of the Holy District. 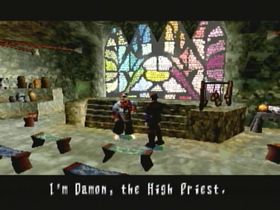 Inside the Holy District's church.

Zoah’s religion was a polytheistic belief system; the people of Zoah believed in many gods rather than a single deity. The religion was based on a number of texts, including The Book of Genesis, The Book of End, and The Book of Zoah. Players controlling Edge can acquire copies of all three of these texts in Panzer Dragoon Saga, also referred to as bibles. It is not revealed whether there were more bibles used by the people of Zoah.

The Book of Genesis and The Book of End told the people of Zoah’s creation myth and prophesied how the world would end. Fans have speculated that these books may be based on the story of how the Ancient Age ended and how the Ancients planned to return, but this is never confirmed in the series.1

The Book of Zoah is a set of laws set out by the leaders of Zoah in the name of their gods. The Book of Zoah appeared to reinforce the closed nature of the Holy District’s community by forbidding the residents of the Holy District from leaving the soil of Zoah and claiming that those who stood outside Zoah were tainted. The book claimed that the world was tainted with the blood of nonbelievers and warned the reader not to associate themselves with people “left behind”. This attitude was evident in the behavior of the Holy District citizens, many of whom shied away from Edge upon his visit or shunned him as an outsider. The book also warned the people of Zoah not to consume food from outside of Zoah and to follow an even stricter code on the Night of Atonement, a time of prayer established by the High Priest. The punishment for disobeying the laws of Zoah was banishment from the protected land.