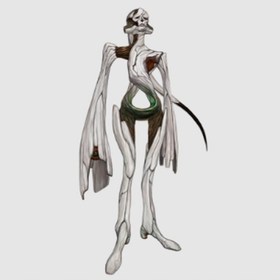 Abadd was a drone from the Ancient Age who was discovered by the Empire shortly before the events of Panzer Dragoon Orta. The Empire had been searching for a drone to operate an ancient armament facility known as the Cradle and Abadd turned out to be exactly what they were looking for. Abadd initially helped the Empire create their own bio-engineered monsters, the dragonmares, but the Empire underestimated his intelligence and the loyalty he had towards his Ancient masters. Blinded by their quest for absolute power, they gave Abadd the chance to escape with one of the six dragonmares he had created.

Since they could not operate the Cradle without the help of a drone, Abadd’s disappearance meant that the Empire could not continue their plan of mass-producing the dragonmares. This ultimately led them to search for a different drone whose whereabouts they did know: a half-drone named Orta who was being held captive by the Seekers in Yelico Valley. However, as the Empire’s dragonmare squadron attacked the valley, a dragon appeared and helped Orta escape while the Imperial forces were occupied with the attack on the Seekers.

Just as the Empire’s dragonmare squadron had regrouped and caught up with Orta and her dragon, Abadd reappeared with his enhanced dragonmare. After attacking the dragonmare squadron and forcing them to retreat, Abadd cryptically told Orta that he had “foreseen her destiny”, and that she “had to save the world from itself”. Afterwards, Abadd flew away with his dragonmare and although Orta and her dragon tried to follow the pair, they ended up losing track of Abadd. 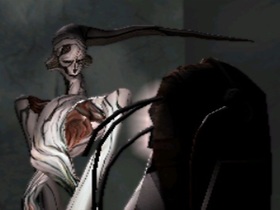 Abadd most likely learned about Orta from the Empire, but it is not revealed why he helped her at that time and simply let her go afterwards. However, Abadd’s intentions with Orta seemed to change after he realised he could not complete the objective given to him in the Ancient Age: that task was to awaken his ancient masters. Abadd’s masters appeared to have been in a form of cryogenic sleep since the end of the Ancient Age, but their life support systems were shut down, possibly at the end of Panzer Dragoon Saga when the Divine Visitor freed the world from the will of the Ancients. Abadd could not accept the fact that he failed his mission and was now left alone in a world he despised.

Trying to come up with some other way of fulfilling his objective, he decided to create a new race of drones that would inherit the world from the Ancients. However, all of the Ancient drones were designed only to serve their masters as slaves, so they were unable to reproduce. Orta was an exception to this rule, as she was in fact half-human. Abadd therefore needed Orta’s DNA to complete his new objective.

Abadd encountered Orta in the Glacial Plains, in the north of the Continent. Orta had defeated an els-enora, a mutant monster who may have lived for thousands of years, but was hesitant about killing it. Abadd finished the monster off, much to Orta’s dismay. When she asked him why he killed, Abadd began to tell Orta but could not finish his sentence, stuttering, “That is my… I am… I… I am unable to complete my primary directive. That is why I need you.” Orta followed Abadd into an Ancient ruin buried beneath the ground. As they travelled to the gate that lead to Sestren, Abadd bluntly told Orta that drones were created as slaves, and that they would die as slaves without heirs. It was their destiny, he told Orta, however there was an exception to this rule that he did not reveal. 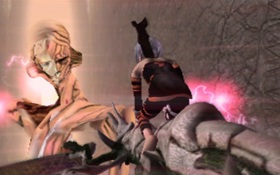 Orta entered Sestren where she encountered a record of her birth and half-drone heritage. Abadd explained his intentions to Orta, telling her that once her body was his he would be able to reproduce himself infinitely. Orta refused to go along with his plan. In the resulting battle, Abadd was defeated by Orta and her dragon and fled the Sestren data network, teleporting himself to the Cradle. He proceeded to reactivate the facility and release all of the unfinished dragonmares. Without their control mechanisms, the dragonmares went berserk and attacked the Imperial forces that were stationed around the Cradle. 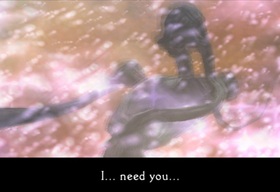 Determined to stop Abadd, Orta and her dragon were once again forced to fight the drone and his enhanced dragonmare in the skies high above the Imperial Capital. During the battle, Abadd told Orta of his nihilism due to a lack of purpose. After the dreamless sleep of eons all he had was emptiness and that emptiness was true fear. He believed that the world was doomed, perhaps because his masters were no longer around, and only with Orta could he save it. Abadd ultimately lost the battle and was destroyed together with his dragonmare. His dying words to Orta were, “I… need you…”