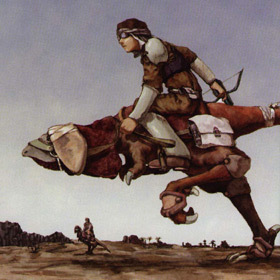 Amongst the many peoples of the Panzer Dragoon world, there are some groups who choose not to shun the savage wilderness around them, but instead to confront and embrace it. Rather than settling down to gather what crops they can from the bleak land, these individuals adopt a more dangerous lifestyle, preying upon the monsters of the world for their survival; because of their nature, they are commonly referred to as “hunters”.

Hunters generally rode through the wastelands on the backs of coolias, as they were one of the few species of monster that could be tamed by humans. Sometimes taking on a nomadic existence, hunter groups often travelled in caravans, pitching their tents in the wilderness and riding out in teams to track their deadly prey.

The other cultures of the Panzer Dragoon world regard hunters in a mixed way; while their lifestyle caused the Empire to think of them as savages, the same qualities could seem brave and noble in less prejudiced eyes. Although their culture never shaped the world greatly, the hunters were always present in the background, offering an alternative to the poor villages of the Frontier, the hidden world of the Seekers or the ever-spreading rule of the Empire.

The hunter culture made a brief appearance in Panzer Dragoon Zwei, at the beginning of the game’s second episode. As Lundi and Lagi rode through the bleak mountainous landscape, several hunters’ tents (bearing strange, eye-like symbols) could be seen near the sides of the great valley. The reason for the hunters’ presence in this desolate region was not such a mystery, though; a variant on the burrower monsters from Panzer Dragoon dwelled in these canyons, and they leaped out of the rocky ground to attack the dragon as he passed. Presumably the hunters were tracking monsters such as these. 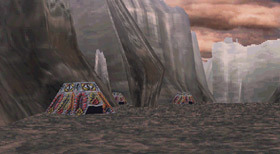 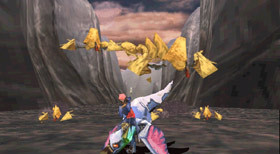 Burrowers lunge at Lagi and Lundi.

This part of the game focused on the war between the Empire and the Meccania Federation, with the right-hand route through this episode taking Lundi and Lagi through a well-defended Meccania outpost. Imperial ships were everywhere however, and as the dragon rode past the hunters’ caravans, small fighter ships descended from above and bombed the tents. Some of the hunters managed to flee on their coolias, riding frantically away. 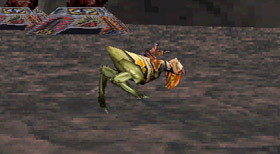 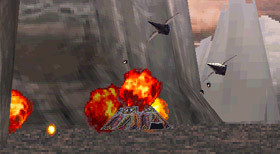 The hunter tents are destroyed by the Empire.

The fact that the Empire bothered to attack these hunters might suggest that they were aligned with the Meccania Federation in some way; for example, if the Meccania Federation had allowed them to hunt undisturbed in that region, those hunters might have felt inclined to fight off the Empire when it came on its mission of invasion, and they could possibly have been waiting in those valleys to ambush any Imperial troops. The Empire certainly seemed to be heavy-handed in its military tactics though, so it is possible that the Imperial ships were bombing anything that moved as they closed in on their target.

Not only were players introduced to the hunter culture right at the start of the first Panzer Dragoon game, but the main character of that game - Kyle Fluge - was a hunter himself. The game’s opening sequence showed Kyle and his companions riding through a rocky wasteland out in the Frontier, the vast wilderness beyond Imperial settlement.

Kyle and his hunter companions.

A burrower lunges at Kyle.

These hunters wore rugged looking clothing that seemed well suited to the harsh environment about them, and Kyle himself had a pair of goggles resting against his forehead, presumably for use in strong desert winds. Kyle’s friends carried rolled-up packs of supplies on their coolias too, a reminder that they would be spending more than a little time out in the wilderness.

It is unclear if Kyle and his companions were hunting or only travelling at this point, but whatever their intention, they found themselves ambushed by the very beasts they preyed upon. A group of monsters known as “burrowers” leapt up out of the cracked earth, and while his friends were too surprised to take action, Kyle set off in close pursuit of the fast-moving creatures. The hunters were armed with crossbows, which seemed quite effective for dispatching weak monsters such as these, even though the final beast escaped when Kyle’s coolia could not keep up with it. Considering that hunters would have to pursue such monsters on a regular basis, it would seem that their lives were far from easy.

Kyle with his crossbow.

One other thing of note is the dialogue that the hunters exchanged when they saw an Imperial battleship flying overhead, just before the burrowers leapt out of the ground. One of them asked, “Is it one of ours?”; these hunters were aligned with one of the nation-states opposing the Empire at that time in some way. 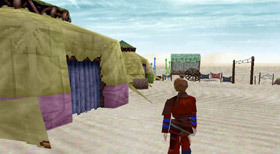 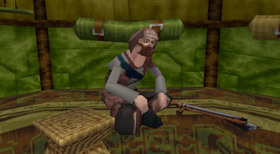 An'jou, leader of the caravan.

Panzer Dragoon Saga gave players a closer look at the lives and society of hunters, as a hunters’ travelling caravan played the role of a “town” area in that game. The caravan was home to a handful of people who had been forced to embrace their nomadic way of life, rather than choosing it themselves; they had abandoned their far-off homeland when it was overrun by monsters, and they had journeyed in search of a new place to settle ever since. 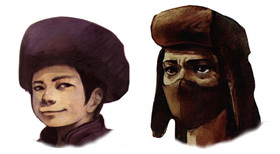 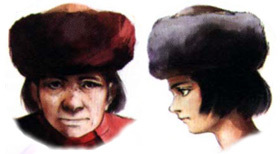 Although their group had apparently been larger when they first set out into the world, only five remained when Edge visited the caravan during his quest: An’jou, the solemn man who had become the caravan’s leader; his young son Enkak; a woman named Kou; her husband Baicah, and their daughter Fei. These survivors seemed to have adapted to their way of life well, and they were joined by an Imperial deserter named Raul, a poor mercenary whose services they had employed to improve their chances. 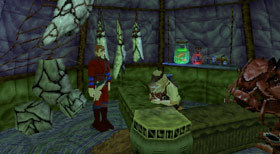 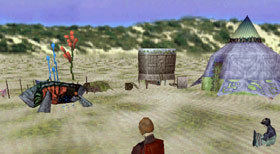 A dead monter killed by hunters.

The caravan’s way of life appeared to be simple and hard. By day, An’jou and Raul would depart on their coolias to hunt the deadly creatures that their people depended upon. Not only did the caravan live off the meat provided by these beasts, but vital medicines could be extracted from their organs, and their tough hides, shells, and other body parts could be put to numerous uses. As Baicah was not so skilled at tracking prey, he remained at the caravan by day to process the relevant antidotes and trade with travellers. The societies of the Panzer Dragoon world were still male-oriented, so the women of the caravan did not go out on the hunting trips. 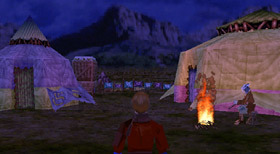 The caravan at night. 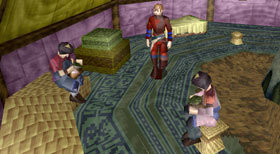 Kou and Fei at work.

All of these characters had their own stories to tell, and Edge could get to know each of them as their caravan moved out of the bleak desert towards the more verdant lands around the Forest of Zoah. Although the hunters had planned to settle down in Zoah, the destruction of that town at the hands of the Empire forced them to reconsider. Ultimately they decided to continue their search for a welcoming settlement in hospitable lands, and they set out into the desert once again.

Hunters gather in the desert.

Players were given one final glimpse of this caravan in the game’s epilogue, for Azel stumbled across it by chance as she headed out on her journey. At this time there were many more tents, coolias and people present though, so perhaps they had merged with another group of like-minded refugees. An’jou offered to let Azel join them in their journey, but Azel would not turn away from her quest. The sympathetic leader gifted her with a coolia, and watched her ride away into the west. 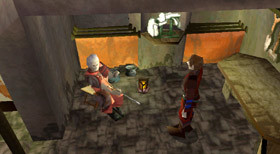 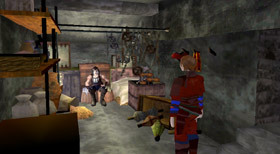 Aldo was also a hunter.

Whereas An’jou’s people had been forced into a harder lifestyle than they would have chosen otherwise, the village of Zoah - before it was destroyed - was home to two ex-hunters who had given up their dangerous way of life. Radgam and Aldo were once members of a hunting team, but some time ago they were ambushed by monsters in a valley, and all of their companions were slaughtered. Afterwards, Aldo never ceased to be tormented by memories of this terrible battle, and upon reaching Zoah he welcomed the safety of village life. 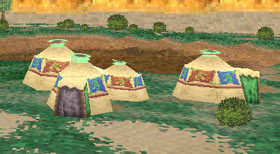 A settlement in the Garil Desert.

Radgam stuck to his old ideals though, and thought Aldo cowardly for giving up so easily. He was intensely proud of his hunting background, viewing the hunter’s life as the most noble course open to a person. Unfortunately though, as he no longer had a team to lead, Radgam’s hunting days were essentially over. The village of Zoah would not have been such a hospitable place for the pair either, as the religious people of the Holy District would have nothing to do with hunters. After all, the “blessed” forest brought forth all the food they needed.

The hunter culture makes another, subtler appearance in Panzer Dragoon Saga, too. As Edge passed the oasis in the heart of the Garil Desert, a small group of brightly coloured tents could be seen on the fertile ground below. They presumably belonged to a group of hunters who preyed upon the many monsters of the desert, a reminder that even the most hostile reaches of the Panzer Dragoon world have their share of human inhabitants.

Was Edge a Hunter?

Although Edge was the central character of Panzer Dragoon Saga, next to nothing about his life before the game’s events took place is revealed; there are some hints and implications, but very few real details. However, it does appear that he was accustomed to the hunter’s way of life; when in the town of Zoah, if Radgam asked Edge about his past experience, Edge would tell him that he had been hunting since he was “a little kid.” 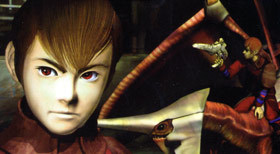 Edge may have been skilled at hunting the monsters of the world, but it seems that he, his friend Rhua and their Captain were broadening their horizons by the time Panzer Dragoon Saga took place. If they had previously lived as hunters, they had apparently left that way of life behind to take on the roles of mercenaries. It was in selling their services to the Empire that they wound up as guards at Excavation Site #4, a quiet job by hunter standards.

Edge’s Captain was also making plans to settle down in Imperial lands, and to enrol Edge in school; he hoped that the boy would eventually find his way into the Imperial Academy itself. Edge had been gradually moving away from the hazardous life of a hunter then, but as we know, fate had an even more dangerous role in store for him.

Although Panzer Dragoon Orta did not feature any typical coolia-riding, caravan-dwelling hunter characters, it did introduce a new society that depended on the savage monsters of the world for its survival: the Wormriders. 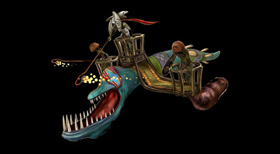 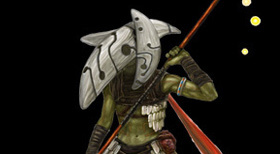 Whereas hunters in the past generally travelled on the backs of tamed coolias, the Wormrider clans had discovered a way to control baldors - fearsome airborne monsters - which presumably made hunting considerably easier for them. With this advantage, it seems that the Wormriders were able to track much more dangerous prey than their predecessors; the second episode of Panzer Dragoon Orta showed Wormriders pursuing not only a yondo-worm, but also a massive ikrakav.

Although they are certainly hunters at heart, the Wormriders are unique enough to qualify as a separate “faction” in their own right, too; further information on this culture can be found in the Wormriders entry.