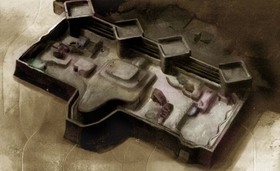 This entry is about the village of Zoah. For the faction, see The People of Zoah.

The village of Zoah was a settlement in the western region of the continent. It is one of the main “town” areas in Panzer Dragoon Saga where Edge can stock up on supplies and gather clues and information relating to the game world. 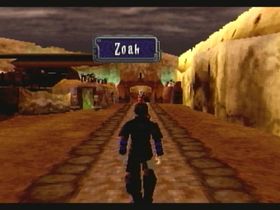 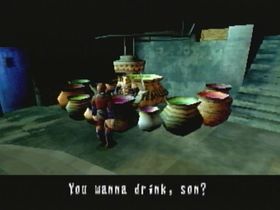 Inside Juba's, a bar in the Liberal District.

Zoah was located near a forest of the same name and the sunken ruins of Uru. It was surrounded by a thick stone wall and guarded by a sturdy gate built near one corner of the town. The buildings within in both districts of the town were built directly into the walls. Pathways leading to the doors of the houses could be found on the ground level and atop other houses. 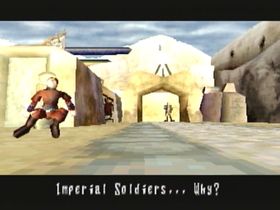 Zoah was described as a large town by the people of An’jou’s caravan. It is unclear if they had seen the settlement for themselves or had heard about it from others.

During the third disc of Panzer Dragoon Saga, the Empire overran the village of Zoah. After Edge destroyed their airforce base, the Empire blamed the people of Zoah and prepared their revenge. The Imperial flag ship, Grig Orig, fired its cannon at the town. The laser cannon sliced through the centre of Zoah, destroying it with a single blast.