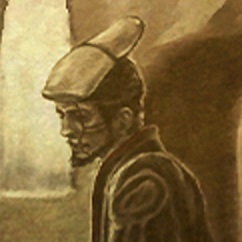 Chief Damad was the leader of the Seekers’ den in the Li Vis region, the place the Seekers fled to after the Empire’s attack on their den in Yelico Valley. After the Seekers found Iva, Damad gave the boy a chance to prove that he was worthy to stay at their den. He told Iva to retrieve water from a nearby river, but warned him of the many dangers involved in doing so. With Damad’s advice, Iva managed to complete the task and was accepted as a member of the Seekers’ den.

As Damad did not have the title ‘Skiad Ops’ it is possible that he was the leader of a different group of Seekers to that of Skiad Ops Endow and Skiad Ops Gash, or perhaps had a lower rank in the Seeker hierarchy. However, Damad’s link to the Seekers in Panzer Dragoon Saga is not confirmed in Panzer Dragoon Orta.