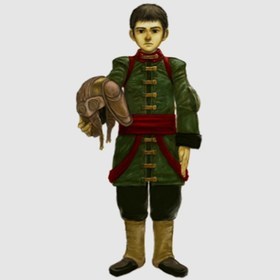 Iva was the son of Letral Naus Demilcol, a researcher that worked on the dragonmare project, and a resident of the Empire. He is the protagonist of a seven episode sub scenario included in Panzer Dragoon Orta’s Pandora’s Box.

Although Iva did not know the full details of the dragonmare project his father was working on (at first), he did find out that the project involved working on some kind of weapon. Iva believed that the Empire was morally wrong, and when Letral Naus prepared to leave for the Seeker city to gather “research materials”, Iva blocked his way. The two had a heated argument about Letral Naus’ involvement with the project, and Iva told his father that he never wanted him to come back. Iva claimed that his father was a murderer like other members of the Empire, and that the weapon his father was working on was “just for killing people”. Iva did not know at the time that his father was actually leaving to join the Imperial forces for the attack on Yelico Valley for reasons to do with Iva’s own well being. That night, Iva’s father was killed during the assault.

After Iva’s father passed away, a coworker gave Iva an amulet that had belonged to Letral Naus. At the time, Iva did not understand the purpose of the amulet.

Iva claimed that he wasn’t sad or lonely and that he would be fine on his own. He believed that he didn’t need friends and could survive on his own. However, he did make the decision to join the Imperial military school, with the intention of joining the army some day. It is unclear if revenge was on his mind at this point. Iva may have joined simply because it was a better option than leaving the Empire which would require trekking across the desert (another option he considered).

Iva had been a sickly child, sometimes having severe fits and not often leaving his house. He described himself as weaker than other boys his age, and as a result of his illness Letral Naus had made him take some black medicine every night. Letral Naus had told Iva that he would die if he did not take the pills. With his father gone, Iva only had enough medicine left to last for fifty days.

Iva went through a number of training exercises controlling a small pod, the risks increasing incrementally. During one training mission, Iva was rescued from the attack of a bio-monster by an older student named Stratei Uramis. Iva admitted to Stratei that he had begun to miss his father greatly. He blamed himself for his father’s death because he had wished that his father would die. Stratei told Iva that this was ridiculous, and that the Dragon of Destruction was to blame. From here, it appears that Iva got the idea to take revenge on the Dragon of Destruction and the little witch who rode it; he began to believe that the duo were responsible for his father’s death, rather than just being a myth used to scare Imperial children.

When the older students were sent into the Arad desert to retrieve “valuable research material”, rumours began to spread that the true objective of the mission was to retrieve the Dragon of Destruction and its rider. Upon hearing this news, Iva snuck aboard Stratei’s ship, hoping to see the dragon with his own eyes. When Stratei discovered that Iva was aboard the ship he was not pleased. Since the mission had already began, returning Iva to the base was not an option, so Stratei decided to give Iva his armour. Stratei thought Iva could use the armour more than he could, as he believed Iva looked a little frail. When the Wormriders attacked the squadron, Iva was given permission by Stratei to take the controls of the ship. To Stratei’s surprise, Iva actually seemed to know which direction the bio-monsters were coming from before they were even in visual range. When he asked Iva how he spotted the bio-monsters so quickly, Iva couldn’t explain it.

Shortly after the battle with the Wormriders, Orta and her dragon attacked the squadron. Although the students had won the battle with the Wormriders without suffering any casualties, they had no hope of defending themselves against a dragon, the ultimate weapon from the Ancient Age. Iva, along with Stratei, could only watch helplessly while the other students were massacred by Orta and her dragon. Eventually Iva and Stratei were the only students who remained. Orta’s dragon launched a well-aimed laser at Iva’s ship, causing it to instantly crash into the ground. Although Stratei was killed, the Seekers who discovered the wreckage found Iva still alive. It is likely that this was at least partially due to Stratei’s decision to give Iva his own armour.

When Iva awoke he found that two of the Seekers, Noof and Emid were arguing over whether he should have been left to die or not. Emid argued that Iva was just a boy, and that leaving him to die would have been insane. When Iva found out that Stratei was dead he was upset, believing that he deserved to die rather than Stratei. When Iva learnt that he was in the Seekers’ den he decided to keep quiet and wait for a chance to escape. In the meantime he went along with Chief Damad’s test to see if he was worthy to be allowed to stay in the den. Iva was required to fetch water from the river in the Forest of Mutation using a pod.

After Iva was successful in his test, Noof apologised to Iva for saying that he should have been left to die and welcomed Iva to the den. Iva began to fit in with the Seekers and learnt that they were the same people who had been killed by the Empire in the invasion that his father had been a part of. Iva wondered if his father was nothing more than a murderer after all, and blamed him for bringing more dragons into the world.

Emid told Iva that she sensed something in him, that he had the power to change things. But before she had time to explain further, Noof informed them that the dragon had been sighted again by the Seekers. In his haste to get revenge on the dragon who had killed his father, Iva raced to his pod and chased after the dragon. However even though Noof had attached a faster engine to Iva’s pod, Iva failed to catch up with the dragon.

Iva returned to the Seekers to report his failure, but just as he arrived he became ill; his medicine had begun to run out. Emid raced to Iva’s pack and grabbed the medicine which Iva swallowed. Unfortunately for Iva, the pills that his father had given him had almost run out and he was down to the last pill. While Emid was searching Iva’s pack she found the amulet that Letral Naus had given to Iva. She revealed to Iva that it was a letter container that tribes on the Frontier used. Emid opened the container, and Iva found that his father had left him a letter. Iva’s father revealed in the letter that his reason for helping in the creation of the dragonmares was to save Iva’s life. When Iva was young he drank from a polluted well and was infected by a virus. The virus could only be prevented from spreading by creating cures out of stronger and stronger monster fluids, finally leading Iva’s father to the dragonmare project; the fluids contained in the medicine that Iva was carrying were those of a dragonmare.

Shortly after Iva discovered the letter, the Seekers were attacked, this time by dragonmares. Like other heroes of the Panzer Dragoon series, Iva realised that his destiny wasn’t to be one revolving around revenge and decided to stop the dragonmares, believing that it was his duty to end what his father had helped to create. Emid had told Iva of an Ancient weapon located in Yelico Valley and Iva raced towards it in his pod. However, when he activated the weapon he found out that it was not truly a weapon as the Seekers had believed; it was a sound generator which repelled the dragonmares in a non-violent way.

Following the battle, Iva became increasingly tired. The final scene in Iva’s sub scenario depicts him in Emid’s arms, and some fans have assumed that Iva died as he had run out of pills. However, Iva’s fate is not confirmed in Panzer Dragoon Orta.