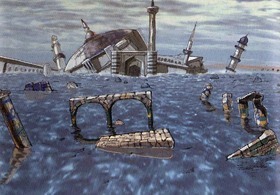 The first episode of the original Panzer Dragoon takes place in a body of water, not far from the canyon area where the Sky Rider handed over his dragon’s mission to Kyle Fluge in the game’s introduction. This lake area, which goes unnamed in Panzer Dragoon, was surrounded by desert and mountainous terrain according to the map featured in the Panzer Dragoon Official Guide Book.1 These geographical details are consistent with the game, explaining why the introduction and second episode of Panzer Dragoon take place in the desert. Although for the purposes of this encyclopaedia entry the area has been classified as a lake, it is also possible that it was intended to be a small sea.

The Lake in Panzer Dragoon

It is not revealed in Panzer Dragoon whether there was a Tower nearby in order to make the area habitable, however the Tower Distribution Map featured in the Azel Panzer Dragoon RPG Guide Book confirms that there was a Tower located in the lake area.2 It is possible that the Tower was submerged under the surface of the lake, or was perhaps linked to the ruins that Kyle entered in the game’s introduction, however neither of these possibilities have been confirmed. 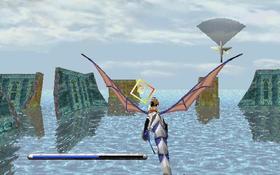 Kyle and his dragon begin their adventure together.

The lake area housed diverse mutated monster wildlife and the ruins of a city submerged beneath the water. Walls of what remained of submerged buildings rose from the depths of the lake. Crooked pillars stood in the dragon’s flight path, causing damage if players controlling the dragon did not dodge the pillars at the right time during the episode’s on-rails gameplay. When Kyle and his dragon flew across the lake they travelled through the iconic rectangular archways, also found in Panzer Dragoon Saga’s Garil Desert and Panzer Dragoon Orta’s Glacial Plains. It is not revealed in Panzer Dragoon if the city dated back as far as the Ancient Age or if, like the sunken city of Uru, it was submerged in more recent times by the Technology Preservation Faction’s environmental control system to thin a growing human population. 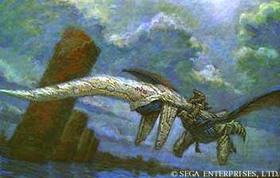 An image of the lake area from Panzer Dragoon's ending

Towards the end of the episode, Kyle and his dragon approached a large building. The architecture of the building featured a domed, pointed roof, suggesting that the game’s designers were inspired by Byzantine architecture found in the real world. The building was featured in the Dragon Canyon track of the 2012 racing game, Sonic & All-Stars Racing Transformed.3 Kyle and his dragon entered the partially-submerged building, which was infested by mutated monsters, however their journey through the building was cut short when an Imperial battle cruiser destroyed at least part of the building. The damaged building is not shown in the next scene, so it is possible that it was completely destroyed. It is likely that the crew piloting the battle cruiser were attempting to capture or kill the dragon, however their reasons for attacking the building are not confirmed. Together, Kyle and his dragon destroyed the Imperial battle cruiser and left the lake area. 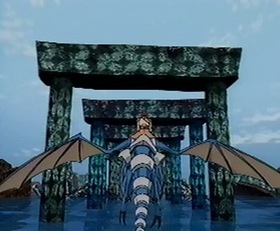 Kyle and Blau fly through some familiar archways.