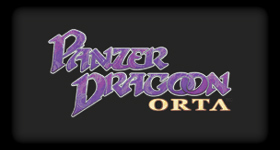 Panzer Dragoon Orta takes players forward several decades after the events of Panzer Dragoon Saga, to a time when the once crumbling Empire had been revived and had risen to dominance again. The Imperials had succeeded in harnessing the bio-technologies of the lost Ancient Age, and they have now created dragons of their own: twisted creatures known as dragonmares. The dragonmares and their riders swept across the Continent, bringing divided nations under the Empire’s tyrannical rule.

In a city hidden in the mountains, a young girl named Orta had lived all her life as a prisoner to a society known as the Seekers. Unaware of her origins, Orta lived out her days alone in a stone tower overlooking the city, until one night the Empire and its dragonmares came for her at last. Before she could be captured though, Orta was mysteriously saved by the legendary dragon, which had returned once again from the shadows of history. Fleeing the city upon the dragon’s back, Orta set forth on her voyage of discovery, determined to discover the truth about herself.