This sketch is of Orta and her dragon. Orta's hat is unravelling to become a scarf.

"For those that don't recognise them, it's Enigma and Normeena (from Dragon Tails) dressed up as the dragon and Orta."

"One of the best games ever in my opinion. Because it was so brutally difficult to play, even in the normal difficulty, but I liked the challenge. Orta and her dragon are without a doubt the best dragon and dragon rider team."

Orta and her dragon soaring through the sky as they annihilate enemies.

Orta along with her dragon soaring through a sky of enemies.

Artwork of Orta that IcogamerXC commissioned Din to make.

"She was perplexed by the pain she felt inside of her. Almost as if the dragon could sense her confusion, It took to its feet, shaking off the snow. And set forth again."

A fan art of Orta on the back of her dragon.

A fan art of Orta and her dragon flying.

Fan art of Orta with her dragon. 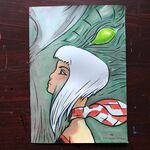 A watercolor painting of Orta with her dragon in the background.

A pencil sketch of Orta and her dragon, based off the Panzer Dragoon Orta's box art.

A fan art depicting Eternal Glacies, the 5th episode of Panzer Dragoon Orta. The background was created with Artbreeder.

Seba in the Sea of Ash

A fan art of a Seba from Panzer Dragoon Orta in the Sea of Ash. 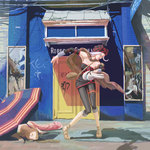 A parody of one of American singer Cyndi Lauper's album covers.

A picture entered into a contest based around Summo Digital's racing game Sonic & SEGA All-Stars Racing. This picture was the contest winner.

The Dragon Resting His Head on Orta

Orta sitting next to her dragon. It shows the bond between the dragon and the rider, which is one of the main themes of the series.

The Girl With the Dragon That Flew

A picture of Orta and her dragon. The artist says, "I used to like Panzer Dragoon Orta, it was one of the reasons I kept my original Xbox around for a while."

"As yet another recent special request by Davontew1, I'm taking the civil liberty of introducing here, none other than the young, courageous (not to mention super-HOT) Orta!"

Trapped High Up in the Tower

Orta contemplating about the outside world from within her cell high up in a tower.

Although it never takes place in the story, here we see Orta riding the armoured Blue Dragon, a mix between the original game and Panzer Dragoon Orta.

A picture of Orta and her dragon. The name of the picture comes from the Panzer Dragoon Orta theme song Anu Orta Veniya which translates as "When the Day Breaks".

White Gold in the Twilight World

Orta and her dragon in the snow, recovering from their near death descent from the sky after suffering an attack from Abadd.