Pictures in this Category

A fan art of Orta holding her gun from Panzer Dragoon Orta.

Panzer Dragoon Orta fan art drawn on my notes during class in Penn College. This is a color version of the original sketch.

The artist depicts what would happen if Orta was a Violet Beauregarde-style blow up character.

Orta in the Blizzard

As you can see, this is a cartoony drawing of Orta surrounded by a snowscape and being showered with snow.

An oekaki (Japanese for "doodle" or "scribble") of the character Orta, against a red background. In this image she appears to be asleep, or at least not quite with it.

A pencil sketch of the main character of Panzer Dragoon Orta.

Orta Resting With the Dragon

A sketch of Orta sitting next to her dragon. Here they are resting after another hard day of monster blasting.

A fan art of Orta riding her dragon is Base Wing form. It is based on the cover of Panzer Dragoon Orta: Kaze To Akatsuki No Musume.

"Tried to experiment again and put more time in color picking than rendering."

"I wanna get me a copy of Panzer Dragoon Orta.... the creature designs look stunning and I had to draw the dragon." 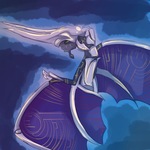 Orta's Dragon in His Base Wing Form

"The main dragon in Panzer Dragoon. Gotta love this guy. I should draw his other forms too cause they're so badass but they're so complex and probably even more impossible to do so HAVE HIS NORMAL DRAGON FORM INSTEAD."

A sketch of the dragon, Orta, thanks to Psylisia Dragoon, standing in a general pose.

A sketch of Orta with a texture and some lighting thrown on. Orta's scarf flows into the shape of the dragon.

Orta Standing Beside Her Dragon

Orta stands beside her dragon, looking on towards the distance.

Orta swells up like a soda bottle after an allergic reaction.

Orta with Her Dragon

A fan art of Orta and her dragon in its Heavy Wing form sitting under a tree.

This sketch is of Orta and her dragon. Orta's hat is unravelling to become a scarf.

"For those that don't recognise them, it's Enigma and Normeena (from Dragon Tails) dressed up as the dragon and Orta."

"One of the best games ever in my opinion. Because it was so brutally difficult to play, even in the normal difficulty, but I liked the challenge. Orta and her dragon are without a doubt the best dragon and dragon rider team."

Orta and her dragon soaring through the sky as they annihilate enemies.

Orta along with her dragon soaring through a sky of enemies.

Artwork of Orta that IcogamerXC commissioned Din to make.

"She was perplexed by the pain she felt inside of her. Almost as if the dragon could sense her confusion, It took to its feet, shaking off the snow. And set forth again."

A pencil sketch of Orta and her dragon, based off the Panzer Dragoon Orta's box art.