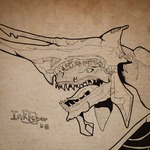 A drawing of the Base Wing that was made for Inktober 2020.

Mobo Celebrating the Birth of His Child

"Remembering the ending of Panzer Dragoon Orta, and seeing Mobo celebrating the birth of his child inspired this drawing. Just the thought of someone as reckless as Mobo having children was funny/cute to me."

A painting of Orta. 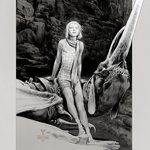 Orta and Her Dragon Ink and Pencil Drawing

A traditional ink and pencil drawing with a few digital tweaks around Orta's face. Created for Inktober 2019.