Fan pictures based on characters and events from the second Panzer Dragoon game. 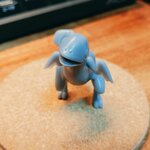 A 3D printed miniature Lagi as a pup.

Originally titled Guardian Dragon Armor, this coloured drawing does a good job of breathing new life into an old dragon. The shades of blue and grey give it a wonderful metallic and almost robotic appearance.

"More Panzer Dragoon fan art. It’s Baby Lagi. The last time I drew him was a few years ago. This one is much better."

"Was gonna draw the Basic Wing from Panzer Dragoon Saga, but decided on Baby Lagi instead."

Be Sure to Kill the Rebels

A fight between Shelcoof and the dragon Lagi.

Because Lagi Had… a Pair of Wings!

A fan art of Lagi flying. 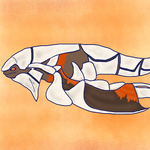 "I probably picked the hardest form to draw considering how few references there are, but I wanted to try sketching the Brigadewing, my favourite dragon form in Zwei!"

A fan art of a cat climbing onto the back of Lagi.

A fan art of a chibi version of Lagi's Windrider form. 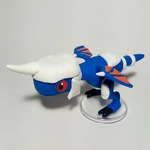 A chibi Blue Dragon made out of clay.

Drawings of the boss fight at the end of third episode of Panzer Dragoon Zwei.

A cute, dragon-shaped 3D render. It looks much like the dragon's Sky Dart form. This model was made from a tool called Rhino.

This is a picture of the dragon pup that Lagi is born as, also very similar to the baby dragon in Panzer Dragoon Saga. It also comes with measurements.

A figure of Lagi as a pup in Panzer Dragoon Zwei.

A miniature of the dragon as a pup.

Dragon Pup in a Box