Fan pictures based on characters and events from the first Panzer Dragoon game.

Pictures in this Category

A drawing of the Blue Dragon and his rider.

"When you want to scribble Panzer Dragoon but still don't want to have to line."

"A little something I whipped up one day over the summer." 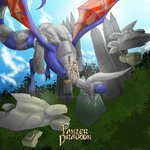 After listening to the whole Panzer Dragoon soundtrack while driving, the artist's fanboy sense kicked and he started doodling a fan art. This is the result.

According to the artist, "the drawing was a birthday present for the stranger who introduced me into the saga."

A colour drawing of the classic armoured Blue Dragon flying over a beach, complete with the Panzer Dragoon logo.

The armoured blue dragon, speeding towards the camera.

Blue Dragon in the Forest

The Blue Dragon against a realistic looking background.

Blue Dragon of the Twilight

The Blue Dragon and rider fly through the twilight sky with the Prototype Dragon ahead of them.

The Blue Dragon, created with Perler beads. These are 5mm wide plastic beads that are placed one at a time on a board, then melted together using a regular clothing iron. About 3 feet wide, 2.5 feet tall.

"I want to do a complete redesign of all Panzer Dragoon characters for my doujinshi 'Panzer Dragoon'. This is one of the concepts for the dragon."

"My wee pal is on the Switch soon." 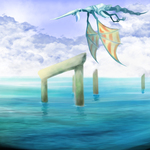 Blue Dragon Soaring Through the Ruins

An image of the blue dragon flying through the ruins of episode one of Panzer Dragoon.

"Lagi's blue dragon form is by far my favorite, with it's impossibly small wings and cute eyes. <3 I really loved his design in Orta, too, but it was so sad to see him looking so.. mortal. :c"

A stunning fan art of Kyle and his dragon fighting the first boss in Panzer Dragoon.

"I spent almost all day trying to draw stuff, but everything was turning out looking terrible. But finally, I was able to draw something that didn't look like crap. It's the Blue Dragon from Panzer Dragoon."

By the Ruins with the Blue Dragon

A crossover image of the Blue Dragon along with the character Mary from the Atelier Marie game series.

Whether you call him the Dark Dragon, Type 02, or Solo Wing Spiritual Class, this form of dragon strikes fear into the hearts of all those in the Panzer world who encounter it.

"This is the Dark Dragon from the first Panzer Dragoon game for Sega Saturn. That game was the whole reason I got a Sega Saturn when I was about 10 or 11 years old."

"Fanart for Panzer Dragoon, based on the original Dark Dragon on the first game, although I did borrow the holes in the wings from Atolm, anyway didn't want to upload but I got requested."